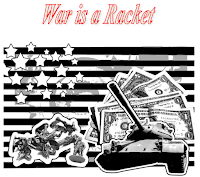 Yesterday thousands marched against the renewal of Trident missile system and heard many politicians voice their opposition to it. The Socialist Party too were in attendance at the demonstration, distributing our leaflets. Our leaflet explained that the problem is not Trident, but war itself born of capitalist rivalries and that "getting rid of Trident makes barely a dent in the global killing machine fuelled by capitalism's wars over our bosses' markets and resources".

If you are opposed to war and all that it represents—as any right thinking person should be—you will advocate policies and take actions which will make war impossible, by removing its causes. That is, you will seek to transform society in the interests of human beings as a whole, without restriction to so-called race, nationality or gender, by establishing socialism in place of capitalism. To do what many on the anti-Trident march do—to object to a particular type of weapon which might be used in wars, whilst implicitly tolerating others—is to accept the inevitability of war, and the social system which underpins it. Campaigning against nuclear weapons is an irrelevance. Nuclear weapons are unlikely to be used in Syria, or Horn of Africa, or any of the other myriad "trouble spots" across the globe. Tens of millions of people have been killed around the globe since the end of World War II, and not a nuclear weapon used.

For sure, we recognize that most on the anti-Trident protest were well motivated: that to use a cliché, "they care" and seek to do something. But actions if they are to be effective require more than refined sensibilities. It is not enough that behaviour is well motivated: if it is to be effective it must be appropriate. The marchers need to learn just what is involved in keeping people free from the tyranny of death by war—whether at the hands of nuclear weapons or more “acceptable” alternatives—and free also from poverty and famine, and poor health and abject lifestyles, and all the other social ills which are celebrated daily by capitalism. If we really care about people we will want to campaign for their enlightenment; for an absence of nuclear weapons and war—in a word, for socialism.

We need to address the root of the problem – the capitalist system itself and vicious competition for profits – and how the problems capitalism creates can only be solved when we abolish the capitalist system itself. While it is important that workers oppose war, we need to recognise in whose interests wars are waged. It's hard to think of a single war that did not have its roots in the need of small elite to make profits. All wars, even small-scale conflicts tend to be fought over resources, outside markets and areas of influence, trade routes or the strategic points.

To end war – and the need to demonstrate against it – capitalism has to be ended. It needs to be replaced by a global system where the resources of the Earth are common to everyone. Competition and conflict between elites over resources must give way to cooperation for the benefit of all the world's inhabitants.

If you lend your support to a political party or organisation that fails to oppose the real nature of capitalist society, how our world is organised for production and how power is distributed, then you are, in effect, supporting a system that breeds wars. What is needed is to go beyond a moral outcry and to attack the system which creates war. Good intentions will not solve the problem of war but there is a revolutionary alternative: destroy capitalism.

Do you want to protest endlessly against each new war as it arises? Or work for a new world of common ownership, democratic control, peace and human welfare? If you are opposed to war, either oppose capitalism in all its forms or settle down to a life of protests...
Posted by ajohnstone at 6:00 am

Your argument is full of holes. Socialism inevitably transforms into communism of the worst kind, or of a lesser ill, fascism. The worst evils of this world have come about as a direct result of opposing capitalism, Germany post WW1, USSR, China - Death count 100M. Capitalism is by no means perfect, and neither is socialism. They are both, like a religion, based on ill conceived ideology and have been proven time and time again to be detrimental to the common man.

It is clear that you have not bothered to make even the most rudimentary inquiry into the political principles of the blog or the Socialist Party.

Firstly we take Marx's understanding that there is no difference between socialism and communism. Our own understanding of those states you mention is that they are state-capitalist, none being socialist or even on the path towards socialism. You also appear to choose not to include fascism as a form of capitalism. So if you wish to continue this exchange it would require you to define what you mean by capitalism.

But if you insist upon arguing figures then you seem to have a strange way of adding up culpability of deaths. Why not include all those who die in famines because or from avoidable diseases because they cannot purchase food or health care or early deaths resulting from pollution.