Under the law, inheritors of a legacy will be taxed 10% of the amount exceeding 100 million baht, though the tax rate will be halved to 5% if beneficiaries are donors' direct ascendants or descendants. If the person who created the will is still alive when a bequest worth over B20 million a year is made to heirs who have a direct blood relationship, recipients will be liable to 5% tax for the amount exceeding B20 million. Inheritors with no direct blood line to the donor will be taxed a flat 5% for a legacy worth over B10 million a year. Taxable assets include property, securities such as treasury bills, bonds, shares and debentures as well as investment units, deposits, registered vehicles and financial assets to be described in royal decrees.

Prasert Prasarttong-Osoth, the founder of Bangkok Dusit Medical Services Plc (BDMS) and Bangkok Airways Plc, transferred his stakes in both listed companies with a combined worth of over B10 billion to his wife and children, the SEC report said. Prasert, the richest businessman on the Thai stock market last year, transferred 9.96 billion baht worth of BDMS shares to his wife and children and another 868 million baht worth of Bangkok Airways shares to a daughter.
Wichai Thongtang, dubbed the take-over king, transferred 173 million shares of BDMS worth 3.75 billion baht to his children.
BDMS vice-chairman Chuladej Yossundharakul also passed his shareholding in the luxury hospital chain worth 4.16 billion baht to his family, the report said.
Ichitan Group Plc president and chief executive Tan Passakornnatee transferred 90 million shares to his three children with a combined value of 1.1 billion baht, while his wife Ing Passakornnatee also gave 60 million shares valued at nearly 1 billion baht to her two children. 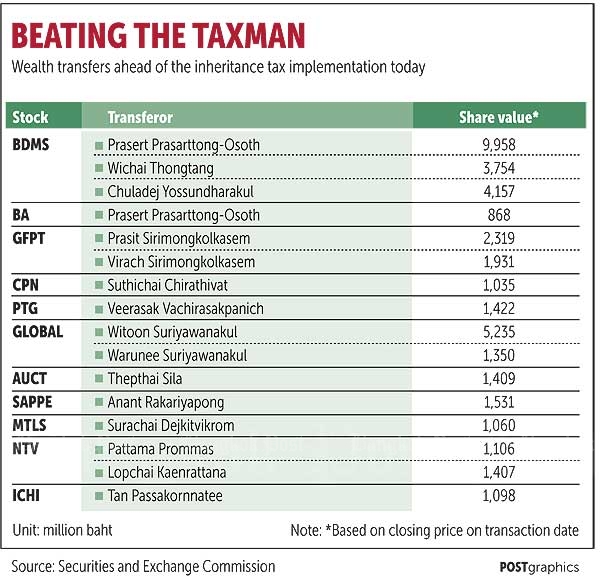 Posted by ajohnstone at 8:57 am