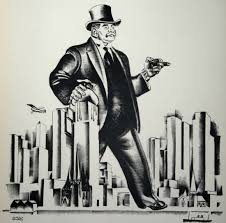 A group of Americans who mainly made fortunes in finance and energy and represent just 158 families gave $176 million—almost half of all the money raised so far—to mostly Republican presidential candidates in the early months of the race.

The 158 families each contributed $250,000 or more in the campaign through June 30, according to the most recent available Federal Election Commission filings and other data, while an additional 200 families gave more than $100,000. Together, the two groups contributed well over half the money in the presidential election.

More than 50 members of these families have made the Forbes 400 list of the country’s top billionaires, marking a scale of wealth against which even a million-dollar political contribution can seem relatively small. The Chicago hedge fund billionaire Kenneth C. Griffin, for example, earns about $68.5 million a month after taxes, according to court filings made by his wife in their divorce. He has given a total of $300,000 to groups backing Republican presidential candidates. That is a huge sum on its face, yet is the equivalent of only $21.17 for a typical American household. Sixty-four of the families made their wealth in finance, the largest single faction among the super-donors of 2016.

Posted by ajohnstone at 2:47 am