TTIP is a Threat 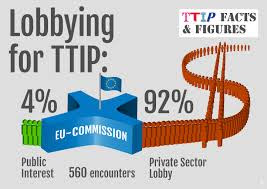 Two trade agreements, the CETA (Comprehensive Economic and Trade Agreement) with Canada and the TTIP (Transatlantic Trade and Investment Partnership) with the US, are currently being negotiated. A new report claims TTIP and CETA deals could allow all public services to be locked into commercial deals. In their current state, it is claimed, all public services including health, education and energy could be at risk of privatisation. People’s access to basic rights such as water and energy could be at the mercy of multinational corporations.

According to the report, Public Services Under Attack, the agreements could allow all public services to be locked into commercial deals that would place profit above the rights of individuals to access basic services - regardless of any possible consequences for welfare. Such deals would be “effectively irreversible.” They would allow multinational corporations to sue governments that try to regulate the cost of public services if it could be proved companies’ profits would be harmed.

Under current WTO agreements, access to water is regarded as a basic human right. The new trade agreements would effectively undermine this, according to John Hilary, the executive director of War on Want, one of the campaign groups behind the report. He claims that in a worst-case scenario, if individuals were unable to pay their water bill, they would be denied access to it.
“Suddenly, instead of water being considered a human right, it would be treated as a commodity and people could be cut off if they can’t afford it,” Mr Hilary told The Independent.  He said: “There is no truth in the government’s claim that public services are safe in TTIP. “Corporate lobbyists have made sure that key services such as health, education, post, rail and water are to be opened up to the private sector, and treaties such as TTIP will lock in that privatisation forever. As a result of the lobbying by these special interest groups in the services sector, it’s quite clear that public services are in the frame and any claim to the contrary is bogus.” Politicians have said that so-called ‘carve outs’ could be used to make sure certain public services would not be open to privatisation, despite being included in the deal. However, the report claims that such exemptions would not protect services such as the NHS. Mr Hilary said: “The UK government and the Commission are saying even though the public sectors are in TTIP, there is still enough possibility of carving out public services. What this report shows categorically and unequivocally is that those claims are meaningless. There’s no truth at all in the substance of the claims that public services can be safe when they’re in TTIP.”

One of the most contentious elements of TTIP and CETA is that both deals employ a “negative list” approach. This means that all services are open to liberalisation unless they are mentioned as an explicit exception. In TTIP there are no such exceptions listed, other than audiovisual services, which were the report says were excluded at the French government’s insistence to protect its film industry. Corporate lobbyists such as the European Services Forum and BusinessEurope have pushed for public services to be opened up to privatisation under TTIP from the start. And it claims that education is particularly under threat: “The US is eyeing the opening up of the education market via TTIP – from management training, and language courses, to high school admission tests.”
Posted by ajohnstone at 2:27 am