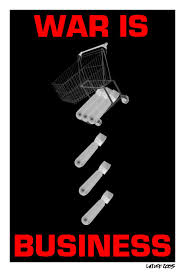 As the media concentrates its headlines on the military offensive in Syria by Russia, much less attention has been placed on the report from Oxfam International which rebukes wealthy and powerful nations for flooding the war-torn country with weapons, fueling bloodshed on all sides, and failing to adequately assist those seeking aid and refuge.

In a briefing entitled Solidarity with Syrians, Oxfam singles out the United States, Iran, Qatar, Russia, Saudi Arabia, and Turkey for "fueling violence and violations of war in Syria through arms and ammunition transfers to parties to the conflict."

The report also slams the international community for its "cursory and insincere" efforts to arrive at a political resolution to the crisis.

For those Syrians forced to flee their homeland, says Oxfam, too many are being met with a faltering aid response from the international community, including from governments most able to afford assistance. Despite the heavy focus on the refugee crisis in Europe, the vast majority of the four million people who are registered as refugees are in Jordan, Lebanon, Turkey, Iraq, and Egypt. Palestinian refugees who had resided in Syria are also being displaced.
"Most wealthy countries are not contributing their fair share to the aid response—appeals are now funded at 44 percent only," the report states. "They have also failed to provide safe and legal routes for Syrians to their territory, including not doing enough to ensure that vulnerable refugees are offered resettlement and other forms of humanitarian admission in sufficient numbers."
The United States, United Kingdom, and Kuwait are identified by researchers as "less than generous in their offers to welcome the most vulnerable refugees"—with the U.S. resettling just 8 percent of its "fair share."

Refugees from Syria and other countries have the right to be free from violence, to aid for basic needs and dignity, and to a welcome of safe haven," said Oxfam executive director Winnie Byanyima. "They are being short-changed on all three fronts. There will be no end to the suffering of people from Syria until action is taken on these issues."

"The aid response is faltering due to lack of funds—or more accurately, the lack of political will to loosen up funds," said Andy Baker, head of Oxfam's Syria crisis response. "Rich countries have ignored repeated alarm bells."