When billions of pounds are at stake why let such trivialities as freedom to protest distract.

Tiananmen Square Massacre survivor Shao Jiang was arrested in the street outside London’s Mansion House where a reception was being held for visiting Chinese Premier Xi Jinping. He was holding two banners, which read “End autocracy” and “Democracy now”. After his arrest and overnight detention police searched his home and took away computer equipment.

Johanna Zhang, his wife, said: “It was like I was back in China again.”

Shao Jiang explained “The real problem is that the Government here is putting trade before human rights. Britain enjoys cheap Chinese goods and Chinese investment but the price is paid by Chinese workers who have no right to strike and no right to organize.” 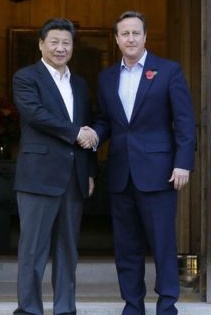 Two Tibetan women were also arrested by police after they attempted to wave Tibetan flags at the passing motorcade.  The two women, Sonam Choden, and Jamphel Lhamo,  were dragged from the scene. According to one eyewitness, the police at first assured the two they weren’t being arrested but then an order countermanding that came and both were arrested.

The three protestors were initially arrested to prevent a breach of the peace he said but were later rearrested on suspicion of conspiracy to commit threatening behaviour.

Tsering Passang, of the Tibetan Community in Britain group, said:
“As a British Tibetan, I am shocked the Metropolitan Police would arrest peaceful protesters. Tibetans are being silenced both in their homeland and now in the UK. I demand fair treatment for all protesters who are standing up for human rights and democracy.”

The former Tory minister Tim Loughton questioned why pro-Tibet and free speech protesters had been “corralled” behind barriers, while Chinese “cheerleaders” were given prime position to watch Xi being driven up the Mall to meet the Queen.

Posted by ajohnstone at 1:15 am