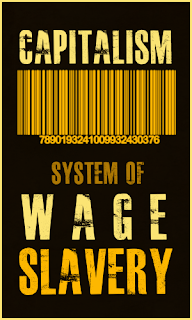 Anti-slavery day is held on 18 October every year.

In 1855, Frederick Douglas, a former slave, wrote:
“The difference between the white slave, and the black slave, is this: the latter belongs to ONE slave-holder, and the former belongs to ALL the slave-holders, collectively. The white slave has taken from his, by indirection, what the black slave had taken from him, directly, and without ceremony. Both are plundered, and by the same plunderers”.

He understood, why can’t others?

The modern slave-owner has no such interest in his slaves. He neither purchases nor owns them. He merely buys so much labor-power – physical energy – just as he buys electric power for his plant. The worker represents to him merely a machine capable of developing a given quantity of labor-power. When he does not need labor-power he simply refrains from buying any. Wage slavery is the most satisfactory form of slavery that has ever come into existence, from the point of view of the masters. It gives them all the slaves they require, and relieves them of all responsibility in the matter of their housing, feeding and clothing.

Wage slavery has become the only option for the majority to sustain itself. The capitalist system was created through acts of theft and murder. This reality is continually defended by theories of the ideal capitalist model claiming as you do to be a return to “economic justice”, which actually only seeks to legitimise the capitalist’s source of wealth and power – the exploitation of labour for the extraction of profit. It is hypocrisy.

Many apologists for capitalism argue that wage-labour isn’t slavery when free and just conditions exist. Ahh, if only that were the case.

Workers sell their labour power to capitalist enterprises for a wage. As a commodity, labour power has an exchange value and a use value, like all other commodities. Its exchange value is equal to the sum total of the exchange values of all those commodities necessary to produce and reproduce the labour power of the worker and his or her family. The use value of labour power is its value creating capacity which capitalist enterprises buy and put to work as labour. However, labour power is unlike other commodities in that it creates value. During a given period it can produce more than is needed to maintain the worker during the same period. The surplus value produced is the difference between the exchange value of labour power and the use value of the labour extracted by the capitalists. In capitalism, however, the wage-worker is a “free” agent. No master holds him as a chattel, nor feudal lord as serf. This modern worker is free and independent: he has choices. He can dispose of his services to this or that capitalist owner, or he can withhold them. But this freedom is ephemeral. He must sell his working ability to someone or other employer or face starvation. In a capitalist society workers have the option of finding a job or facing abject poverty and/or starvation. Little wonder, then, that people “voluntarily” sell their labour and “consent” to authoritarian structures! They have little option to do otherwise. So, within the labour market workers can and do seek out the best working conditions possible, but that does not mean that the final contract agreed is “freely” accepted and not due to the force of circumstances, that both parties have equal bargaining power when drawing up the contract or that the freedom of both parties is ensured. His slavery is cloaked under the guise of wage-labour.

When the worker has found an employer he receives in return for his labour a price known as wages which represents on the average what is necessary for his sustenance so that he can reproduce the energy to go on working, and also produce progeny to replace him when his working days are over. During the working-day the worker produces wealth equivalent to that for which he is paid wages, but this does not require all the time of the working day. In providing for his own keep he has also produced a surplus and this surplus belongs to the employer. This may eventually be split into profit to the manufacturer, rent to the landlord, and interest on capital invested by a financier. As capitalism develops the time in which the worker produces his own keep decreases while the surplus accruing to the capitalist increases. During this development the productivity of labor increases at an accelerating tempo: The worker continually produces more with less.

So when a man sells his labour power a number of hours for a certain wage, the amount of necessaries to produce his wages is always smaller than the amount of labour which the employer receives from him, the difference between what the worker receives as wages and what his labour power produces during his working time, constitutes the sole source of unearned income, i.e., capitalist profits. So profits exist because the worker sells themselves to the capitalist, who then owns their activity and, therefore, tries to control them like a machine.

It would be wrong to confuse exploitation with low wages. It does not matter if real wages do go up or not. The absolute level of those wages is irrelevant to the creation and appropriation of value and surplus-value. Labour is exploited because labour produces the whole of the value created in any process of production but gets only part of it back. On average workers sell their labour-power at a “fair” market price and still exploitation occurs. As sellers of a commodity (labour-power) they do not receive its full worth i.e. what they actually produce. Nor do they have a say in how the surplus value produced by their labour gets used.

The worker goes into the labour market as an article of merchandise, and his wages, that is, his price, is determined like that of any other article of merchandise, by the cost of production (i.e. the social labour necessary), and this in the case of the worker is represented by the cost of subsistence. The price of labour power fluctuates by the operation of supply and demand. There are generally more workers in the market than are actually required by the employers, and this fact serves to keep wages from rising for any length of time above the cost of subsistence. Moreover, machinery and scientific applications are ever tending to render labourers superfluous, with a consequent overstocking of the labour market, decrease of wages, and an increase in the number of the unemployed. Under these conditions reelative poverty is necessarily the lot of the working-class.

We have the worker entirely dispossessed of the means of getting a living except by selling himself as an article of merchandise to the owners of the means of living. This is wage-slavery.