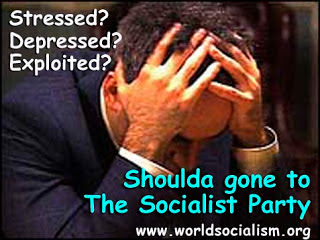 Of all the people who leave for work on any given day, about 1000 do not return home—they die in workplace accidents.

This is stated on the basis of the total number of occupational accident fatalities in a year, the WHO/ILO estimate for which is 360,000 in a year.

Deaths in a year from occupational diseases are over four times higher (1.54 million) than the fatalities caused by occupational accidents.

The ILO says over 600,000 workers die due to exposure to hazardous substances in a year.

Long hours spent in unhealthy, stressful work conditions are another factor of serious concern, with excessive working time being a cause of as many as 750,000 or almost one-half of the total number of occupational disease fatalities in a year, WHO/ILO estimates.

According to the European Working Conditions Survey, 6 million workers are exposed to workplace violence in a year in the European Union.

If verbal violence is included, this number rises to 30 million.

In the USA on average, about 670 workers die and 106,000 have to be taken for hospital emergency treatment due to workplace violence a year.

In the USA and Europe, various surveys reveal that in the course of their career, over 50% of women and over 15% of men are exposed to sexual harassment.

Although an average employee spends 81,396 hours at work, adequate efforts do not appear to have gone into making working time healthy, friendly, involving and creative. 60 per cent per cent of the workers are emotionally detached while 19 per cent are miserable, while only the remaining 21 per cent can be stated to be engaged.

In Europe those engaged are only 14 per cent.

If the survey asked did you feel worried at work yesterday, 56% are likely to say yes.

If asked did you feel stressful at work yesterday, 59% are likely to say yes.

When asked if the worker felt physical pain a lot of the day, 33% will say yes.

31% would admit to have been angry.

Few would venture to call this happy or creative working environment.

Posted by ajohnstone at 9:22 am