"Your money or your life." 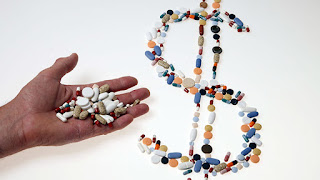 Americans diagnosed with cancer are at risk of losing their life savings because cancer drug costs are escalating almost as fast as the worst forms of the disease, according to a Mayo Clinic medical journal article decrying these costs signed by scores of nationally known oncologists. Nearly 120 oncologists co-authored the article, including more than 30 past presidents of the American Societies of Clinical Oncology, Hematology and Cancer.

There will be a rising incidence of cancer in the aging population and high cancer drug prices will affect millions of Americans.

Cancer will affect one in three people during their lives. Most health plans require co-pays of 20 to 30 percent of the total drug cost. In 2014, all of the cancer drugs approved by the U.S. Food and Drug Administration—including promising approaches such as molecular-focused therapies—were “priced above $120,000 per year,” Mayo noted. That figure is double the average annual U.S. household income of $52,000. “Patients with cancer then have to make difficult choices between spending their incomes (and liquidating assets) on potentially lifesaving therapies or foregoing treatment to provide for family necessities (food, housing, education),” Mayo said. “This decision is even more critical for senior citizens who are more frequently affected by cancers and have lower incomes and limited assets.” Oral medications were most expensive, but their overall sky-high cost meant that “10 to 20 percent of patients with cancer do not take the perscribed treatment or compromise it.”

“Cancer is very scary,” Dr. Ayalew Tefferi, the lead author, told NPR. “Everybody’s shocked. But they don’t know about the second shock coming, and that is the financial destruction that’s coming with it. That comes in the course of treatment. That comes after the patient dies. All of a sudden, they see that their lifelong savings is being given to drug companies.” Tefferi explained , “It is a crisis, an ongoing crisis, that needs to be dealt with as soon as possible. This undermines our Hippocratic Oath, and undermines our responsibilities to our patients.”

Tefferi blames drug company greed, physicians who are too quick to prescribe new drugs without proven efficacy, health insurers willing to go along with upwards of $3,000-a-month co-pays, and a lack of federal government oversight adding checks and balances to a Wild West of drug pricing — especially for the federal health plan for seniors, Medicare, which is barred from negotiating drug prices. “The prices are fixed by the drug companies,” Tefferi said. “There is no regulation… drug companies hold the cards in terms of deciding how much we have to pay for them, or the patients have to pay for them.” Medicare, unlike the Department of Veterans Affairs, has been barred by Congress from negotiating for drug price breaks—one of the pharmaceutical industry’s sordid lobbying achievements.

Countering the pharmaceutical claims that they are not exploitative, Donald W. Light, a fellow at Harvard University’s E.J. Safra Center for Ethics and a professor at Rowan University School of Osteopathic Medicine, and Hagop Kantarjian, professor and chair of the Department of Leukemia at MD Anderson Cancer Center, in the May issue of AARP Bulletin, said, “The argument that drug companies are offering improved drugs for these higher prices is not true,” they continued. “Oncologists find that most new cancer drugs provide few clinical advantages over existing ones. Only one of the 12 new cancer drugs approved in 2012 helps patients survive more than two months longer.” The two researchers also deconstructed the industry’s claim that it spends on average $1.3 billion to create new drugs and get FDA approval. The real figure would be one-tenth of that—closer to $125 million, they said, after deducting taxpayer subsidies, comparisons to other investment opportunities, inflating the cost of basic research and other factors. “In sum, we find no credible evidence that the real research costs to major companies themselves for cancer research are higher than producing other drugs,” their AARP analysis said. “So why are cancer drug prices higher? We think pharmaceutical companies are price-gouging. Even worse, companies raise the prices on some of their older drugs by 20 to 25 percent a year. In the past decade, they have almost doubled their prices for cancer drugs.”

The pharmaceutical industry is presently lobbying Congress to pass a bill that would slow the distribution of generic drugs—adding billions to annual taxpayer costs for Medicare and Medicaid, progressive economists say—by exempting drug makers from a new patent review board that was intended to keep companies from making bogus claims about their patents. In other words, while some of the nation's leading cancer doctors are trying to draw attention to an unnecessary medical crisis causing financial ruin for many American households, the pharmaceutical industry is pressuring Congress to give it greater profit-making abilities. 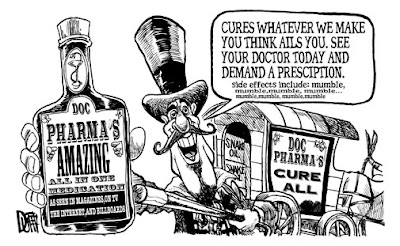 Capitalism once more proves how sick a society it is when it endeavours to make profits off sick people. It preys on the weak the vulnerable and the elderly. Of course, the blame doesn't belong to just the pharmaceutical companies and the US Government, but the American people as well. It is the majority of American people who think the capitalist system is perfectly fine. It is the majority of American people who voted in Congressmen and Congresswomen who continue to vote in the interests of massive companies at the expense of the same people who voted them in. (Just where do the “pro-lifers” actually stand?) The drug companies and the government may be the ones working the levers of our national demise, but it is the American people cheering them on. We cannot change the system by using the system itself. The so-called safety-net doesn't exist in any shape, manner or form. Business exists to make a profit. If it's activities end up benefiting people, that's an unintended consequence, a mere "bonus". But the first interest of any business is to make a profit. Everything else is secondary to that.

Big Pharma is murdering us for their profits but they kill us off slowly to ensure a healthy return before our demise.

Posted by ajohnstone at 1:35 am