Coal - Keep it in the hole 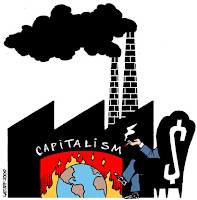 Renewable energy is an easier, quicker and cheaper method than burning coal to help lift people out of poverty through access to power, Oxfam Australia says, intent upon challenging the mining industry's "spin" about coal and poverty. Coal, Oxfam says: "has found a loyal champion in the Australian government."

Yet coal is ill-suited as a power source for most people living without electricity.

More than one billion people around the world don't have power and 84 per cent of those live in rural areas, the Powering Up Against Poverty report says. It says the cost of extending electricity grids to those rural areas offsets any economic incentive of coal power, making renewable energy a cheaper option. It's also quicker to install local solar panels than build coal plants. In addition to the negative consequences of extreme weather events because of global warming, it says, coal mines kill hundreds of thousands of people as a result of air pollution, and displace poor communities.


Oxfam Australia's climate change policy advisor and report author Dr Simon Bradshaw said contrary to the rhetoric of the coal industry, coal was not suited to meeting the needs of most people in the developing world living without electricity.

"Four out of five people without electricity live in rural areas that are often not connected to a centralised energy grid, so local, renewable energy solutions offer a much more affordable, practical and healthy solution than coal," he said. "The Australian coal industry, faced with the rapid decline in the value of its assets and an accelerating global transition to renewable energy, has been falsely promoting coal as the main solution for increasing energy access and reducing poverty around the world. But as well as failing to improve energy access for the world's poorest people, burning coal contributes to hundreds of thousands of premature deaths each year due to air pollution and is the single biggest contributor to climate change, pushing people around the world deeper into poverty."

Dr Bradshaw said Oxfam was seeing the world's poorest people made even more vulnerable through the increasing risk of droughts, floods, hunger and disease due to climate change.  "The argument that 'coal is good for humanity' really doesn't stack up when you consider the facts; such as the major shifts in energy and climate policy in China, India and other major economies; the cost of renewable energy is falling fast; new technologies such as advanced batteries are overcoming any shortfalls renewable energy has had in the past; investors are shifting their focus from coal towards renewables, and the evidence of harm that coal does to communities," he said. "The future can be brighter for both Australia and poorer communities around the world; but only if we wake up to the changing global realities, stand up to vested interests and help to build the renewable energy economies of the future."

Posted by ajohnstone at 3:13 am