‘Green Capitalism: The God that Failed’ 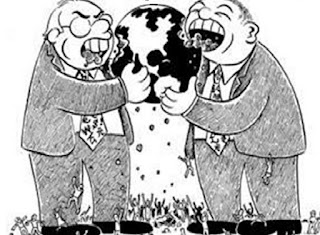 The climate crisis is the greatest threat humanity has ever faced. In a new book, ‘Green Capitalism: The God that Failed’, Richard Smith argues that "sustainable production is certainly possible but not under capitalism" and even more forcefully, "capitalism and saving the planet are fundamentally and irreconcilably at odds." Economic expansion is unavoidable under capitalism, but destruction of the planet is the inexorable result.

A handful of economists propose sustainable capitalist models, such as degrowth or steady-state versions of capitalism; or "green capitalism," in which technological advances, recycling, and a "dematerialized economy" would somehow permit unending yet sustainable growth. The villains for them are "corporate capitalism," "casino capitalism," etc., rather than capitalism itself.

Smith explains, "why ecologically suicidal growth is built into the nature of any conceivable capitalism.  This means ... that the project of a steady-state capitalism is impossible and a distraction." In particular, "under capitalism, the whole point of using resources efficiently is just to use the saved resources to produce even more commodities, to accelerate the conversion of even more natural resources into products." This cannot be avoided under capitalism without causing economic collapse. "Insatiable consumerism is an everyday requirement of capitalist reproduction ... No overconsumption, no growth, no jobs." Why no jobs? Consider that "more than two-thirds of market sales and therefore most jobs, depend on direct sales to consumers while most of the rest of the economy including the infrastructure and military is dedicated to propping up this consumerist 'American way of life.' "Even ignoring that, how could capitalism ever achieve a steady state? "Are Toyota or General Motors looking to produce the same number of steel cars next year as this year?" Smith asks. He goes on to point out that "Consumerism and overconsumption are not 'disposable' and cannot be exorcised because they are not just 'cultural' or 'habitual.' They are built into capitalism and indispensible for the day-to-day reproduction of corporate producers in a competitive market system in which capitalists, workers, consumers and governments alike are all dependent upon an endless cycle of perpetually increasing consumption to maintain profits, jobs, and tax revenues ..."

Smith outlines ecological constraints necessary for any post capitalist economy and describes ecosocialist alternatives to capitalism. The necessary changes are staggering. The entire economy must contract and be restructured with international cooperation. Capitalism is incapable of finding jobs for workers unemployed by degrowth, even though much expansion is needed in social services like health care, education, environmental remediation, etc.
"Since we live under capitalism, not socialism, no one is promising new jobs to all those coal miners, oil drillers, gas frackers, power plant operators, farmers and fertilizer manufacturers, loggers and builders, autobuilders, truck drivers, airplane builders, airline pilots and crews and the countless other occupations whose jobs would be at risk if fossil fuel use were really seriously curtailed."
Smith recognizes that building a movement requires more than being against ecocidal destruction; it requires a vision for the future. To that end he outlines a number of attractive and attainable features of an ecosocialist society.

Capitalism has had its time.