We are with our fellow workers 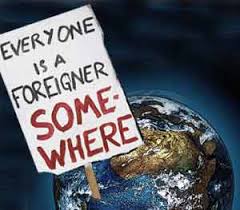 There are attempts by politicians and the media to dehumanise some of the world’s most vulnerable and desperate people, men, women and children who risk their lives to flee poverty, oppression and war in search a better life.

Berakat from Eritrea, where he was discriminated for being Christian but now he is being persecuted for wanting to reach England. “Why are you closing the door?” he asked. “We’re not animals, barbarians.”

Across in Calais Leigh Daynes, executive director of Médicins du Monde explains
“We’re treating a growing number of people who have been injured, many of them seriously, after falling from trucks and from police brutality. Almost all have fled their home countries because of armed conflict, political, religious or racial persecution. Many have endured extremely long, difficult and dangerous journeys.”

Politicians and the media talk of an “immigrant invasion” and the part of feral press has called for British troops to be used in France to guard the Euro-Tunnel. They declare 2,000 migrants had attempted to enter Britain in one night, without making it clear they meant many repeated attempts by the same group of a few hundred migrants. But the original claim was enough to leave the clear impression that Britain was now under nightly siege and the government was powerless to do anything about it.

United Nations’ Peter Sutherland said: “Anybody who thinks that by erecting borders and fences in some way a particular state can be protected from alleged ‘floods’ – which are anything but floods of migrants – is living in cloud cuckoo land.”

In Germany for the first half of this year, 200 attacks on asylum-seekers’ homes have been recorded. The real figure, say analysts, is probably far higher. Many refugees fail to report attacks, largely because they do not want to bring further attention to themselves. The Hungarian Prime Minister, Victor Orban, actively incites peoples fears to compete for popularity with the neo-fascists. “What we have at stake today is Europe, the European way of life, the survival or disappearance of European values and nations, or their transformation beyond recognition … We would like Europe to be preserved for the Europeans. But there is something we would not just like but we want because it only depends on us: we want to preserve a Hungarian Hungary.” He organises xenophobic referendum campaigns and builds walls on his borders – ironically, where the Iron Curtain was lifted.

This not need to be.  German local communities come together gathering food and clothing for refugees , retired teachers offering language lessons for free, and people opening their homes for foreigners to live with them. In Fürstenfeldbruck, a town of 35,000 in Bavaria , that has taken in 1,600 refugees over the past few months, 600 locals have signed up to volunteer their time for everything from teaching refugees German to organising computers and internet access. “We’re working flat out,” said a woman who helps asylum-seekers fill out their application forms. “And we have been for months.”

Is the UK full up? "For example, you could say that if we hadn’t built all the golf courses we have in Surrey, then we’d have a lot more space to build housing and therefore be in a better position to manage an increased population….Logic dictates that you cannot keep increasing your population forever. However, when I first began studying this subject in the 1960s, the assumption was that the population would increase to as much as 80 million by the end of the century. All sorts of regional strategies were developed, including plans to create substantial extra capacity in towns like Milton Keynes, Swindon and Northampton. But then the pill was invented and that simply didn’t happen."

Are immigrants taking our jobs? “When something like a quarter of a million Poles entered the UK. However, recorded unemployment rates went down between 2003 and 2005, and recorded vacancy rates actually went up slightly… the data would suggest that they weren’t taking the jobs of Brits…The econometric evidence suggests immigration doesn’t generally impact on the pay or employment rates of existing citizens. People in lower paid jobs are more likely to be affected, but even then the effect, statistically speaking, is relatively small.”

Are most immigrants illegal? There are only two countries that really have any idea how many immigrants have entered illegally, and they are Australia and North Korea. This is because Australia counts everyone in and out, while North Korea has border controls that most people would consider unacceptable. Many of the people who are in the country illegally are people who have entered legally, but stayed beyond the period they had permission for. But the number of people who actually get into Britain illegally must be pretty small, due to the stringent checks that exist at our main points of entry.

Do immigrants claim a disproportionately high amount in welfare and benefits payments? “The studies that have been done do show that immigrants are less likely to claim benefits that native Britons. People who have asylum claims, for example, are not allowed to be employed while their application is being processed, so it is inevitable that they will need more support through welfare payments. But again, that is a relatively small group. On the whole, the story is that migrants are less likely to access benefits payments.”

Do immigrants put too much strain on education and health services?” Services may be under pressure, but you simply cannot generalise….The number of immigrants who work in health and care sectors…have suggested as many as a one in four new nurses are recruited from abroad.”

As Leigh Daynes again pointed out: “These are ordinary people – mothers, fathers, daughters and sons – living in the most horrendous conditions that no one should have to endure. Many are highly educated, including doctors, dentists and engineers, fleeing extreme violence and poverty and simply wanting better lives for themselves, so much so they are prepared to risk their lives for it.”

“Let those desert us who will because we refuse to shut the international door in the faces of their own brethren; we will be none the weaker but all the stronger for their going, for they evidently have no clear conception of the international solidarity, are wholly lacking in the revolutionary spirit, and have no proper place in the Socialist movement while they entertain such aristocratic notions of their own assumed superiority.” - Eugene Debs