As the BBC faces an uncertain financial future, a new survey reveals that nearly 70% of the public do not trust the independence of experts featured on BBC programmes. The open survey, which looks into the impartiality of the BBC when it comes to the reporting of genetically modified food and farming, collated results from 1000 people, from both sides of the GMO debate. 667 of these said they did not trust the independence of the experts featured on programmes such as Panorama, Countryfile and Radio 4’s Today programme.

The survey conducted by campaigning group Beyond GM [1] comes in the wake of the Panorama programme, GM Food – Cultivating Fear which was broadcast on June 8th and claimed to explore a new generation of GM crops. However, the programme, presented by Countryfile reporter Tom Heap, pursued a pro-GM agenda and featured three ‘experts’ who have commercial associations with GM technology. For example:


Nearly 90% of the people surveyed felt that academics, researchers and other so-called independent experts featured on BBC programmes should reveal their sources of income, corporate affiliations and whether or not they are patent holders, to the public before being interviewed on BBC programmes. Nearly three quarters of the respondents felt that BBC programming represented a pro-GM stance. As one respondent wrote:
“BBC News reports are very superficial and don’t even attempt to independently investigate the downsides of GM, such as: potential health issues, increased use of pesticides, contamination of conventional/organic crops, pesticide resistance, whether advertised yields are achieved.”
Specifically the survey found that:


The comprehensive report on the survey also includes examples of other pro-GMO biased programmes which the BBC has broadcast stretching back to 2008, analysis of why the media continues to get this important topic so wrong, as well as an appendix of comments from respondents revealing that, far from being uninformed and fear-driven, those who oppose GMOs have many legitimate and well-informed concerns which they would like answered.

A new study commissioned by the Norwegian government, and conducted by a nationally recognised scientific authority on the safety of biotechnologies, concludes that available scientific data on GM crops is inadequate to prove their safety.

The overall scientific consensus is that GMOs are safe. There are meta studies out there covering 1000s of studies. Please no more of these crap anti GMO posts!

For me the main concern is not the health concern to humans. Almost two decades of consumption of GMO food has been experienced and no link made.

However, there has been justifiable debate upon whether GMO is effective economically. Pesticide resistance is just as much a problem with GMO as with other crops. The promise of GMO to end hunger and improve general health has not been demonstrated (much GMO products being biofuels) and i think most socialists would concur that it is a false claim put out for commercial reasons. GMO further concentrates the control of food industry into fewer corporations and increases the tendency towards monoculture for export to the detriment of small farmers and local populations' food security.

There are many technologies that may well be beneficial in socialism with democratic control in the decision making but when used and applied under a capitalist economy can be harmful in more ways than just health.

The truth of the matter is that we do not require GMO technology yet it is being presented falsely as the imperative to feed the future population.

The Norwegian report is well worth a read and i would not consider it to be crap but published by an authorative government agency.

So much of the information is not independent but based on Monsanto findings alone.

I have encountered the same complaints concerning access to pharmaceutical industry research. It is no coincidence i believe that faults with certain medications are only exposed when the patents no longer apply and they become generic and end being a milk cow for the companies

You're just muddling two issues together. The use of GMO as a technology is a separate issue to the monopolisation of the food industry is another. Not all GMO crops are produced by multinationals and not all patented crops are GMO. Read the Slate article above even if just part 4. I used to be part of the anti-GMO movement and was at one stage banned from Lincolnshire for taking part in a demonstration that trashed a GMO field, but in the light of the evidence (and the evidence is overwhelming) I have changed my mind. I sure you can to... Darren Poynton

Anyhow regardless of what I think The Socialist Party does not have an agreed anti-GMO position, blog posts should not be giving the impression that it does..

..This is not the first time there has been complaints about this..

This post does not actually concern safety of GMO but considers the public perception of the BBC coverage of the issue. At the time where its charter is up for review and attention being paid to its reporting on many subjects, i think the blogger is entitled to re-post an argument that the BBC is a biased body and is seen as such by many.

The blog devoted a post to the Party's position on GM
http://socialismoryourmoneyback.blogspot.com/2014/12/gmo-where-we-stand.html

Disclaimers are useful as this example

"The World Socialist Movement sits on the fence when it comes to the claims and counter-claims about the safety and benefits of GMO foods. Like other controversial technology such as nuclear energy or fracking, we believe that it has to be an informed choice of people in a socialist society whether these developments are deemed useful or not. We do however think that current debates on those topics can be unduly influenced by vested business interests."
http://socialismoryourmoneyback.blogspot.com/2015/05/is-gmo-worlds-salvation.html

Our concerns are about democracy in application of technologies and the probable detrimental economic effects of GM farming practices upon fellow workers. Often when we cite articles those are mixed up with views we cannot fully endorse and i accept we should take more care in differentiating those.

Well if there are "detrimental economic effects" that's not because of GM but because of the market. But for now I'll leave it at that, the above comment is not to bad. Just read that Slate article though ;) 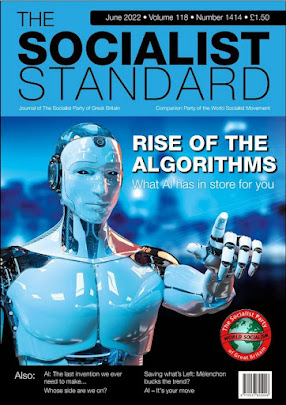