The Real Costs Of College Education

Inflation is such an insidious standard of living destroyer.  Little by little those dollars in your wallet get worth less and you suddenly find yourself needing to go into large levels of debt to purchase cornerstones of the American Dream.  Going to college has been the dream for many Americans after the G.I. Bill was signed into law in 1944.  Even in the early part of our country, going to college was a privilege largely reserved for the elite and wealthy.  It wasn’t viewed as a public good until World War II.  The heyday of the US middle class was after World War II and slowly this has been chipped away starting in the 1970s.  As of today, going to college is fraught with so many financial landmines.  Working class areas are targeted by predatory for-profit colleges.  Many others go to quality schools but come out with too much debt relative to what they can earn in an environment littered by lower wage jobs.  This is the future of higher education.  But think of this jaw dropping stat: since 1990 tuition has gone up 300 percent.  You can rest assured wages have not kept up.

Take a look at this recent chart: 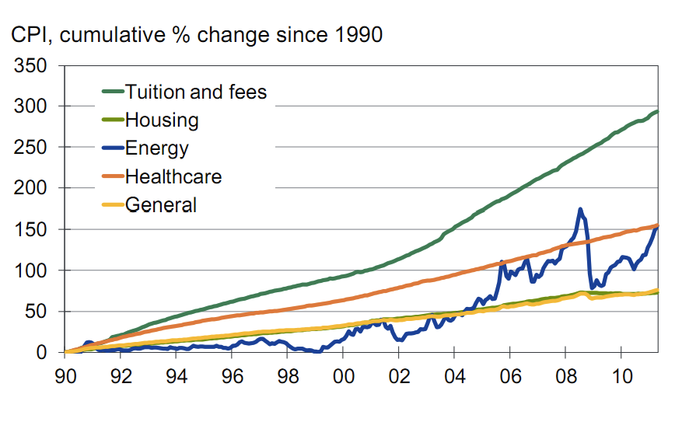 Even in the face of rising energy costs and the biggest housing bubble in our lifetime, college tuition and fees is in a world all unto itself.