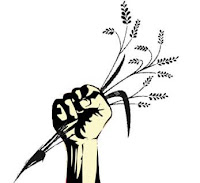 Many environmentalists embrace the idea of locavore, that is, food produced on small farms close to where it is consumed—or "local food" for short. Although it accounts for only about 2% of all the food produced in the United States today,  the U.S. Department of Agriculture, sales of food going directly from farmers' fields to consumer's kitchens have more than tripled in the past twenty years. Despite the endorsement of celebrity chefs and many community organisations Pierre Desrochers and Hiroko Shimizu in their 2012 book ‘The Locavore's Dilemma: In Praise of the 10,000-mile Diet’ take the contrary view to its supposed ecological benefits and argue that it actually conflicts with the goal of feeding more people better food in an ecologically sustainable way.

The advocates of local food includes in  its economic benefits what economists call the "multiplier effect": A dollar spent on local food results in a local farmer spending part of that dollar on other goods and services in the local economy, creating a virtuous circle of wealth and jobs. Critics counter that through specialization and trade food can be grown with fewer resources and with the fewest costs than the higher-priced local produce. In effect, goes the argument, we are all poorer by paying the premium prices of local food, since those higher prices eat into our ability to buy other goods and services. Also because there is a correlation between income, on one hand, and the consumption of fresh fruits and vegetables, on the other, the higher prices of local food would make consumers poorer and more reliant on unhealthy food.

Further, the claims that the environment benefits is challenged. Locavores have argued that transporting food long distances is bad environmental behavior and that reducing "food miles" is an important reason for buying local food. Critics point out that since food transport accounts for less than 5% of the carbon emissions embodied in food in the United States, it is better to exploit comparative advantage in growing conditions—reducing the use of land, water, chemicals, and energy—and engage in long-distance trade. For example, growing tomatoes in the UK reportedly produces three times the greenhouse gas emissions associated with importing them from Spain, since the extra energy and fertilizer required for greenhouse-grown tomatoes overwhelms the emissions savings from reduced transport. Further, individual car trips to farmers' markets may cause more pollution than shipping large quantities of food via trucks or ships, which take advantage of economies of scale in transport.

Economist Edward Glaeser, in a critique of the trend toward urban farming, estimates that urban population densities would need to be cut in half if just 7% of existing agricultural land were relocated to metro areas. Since lower population densities would lead to longer commutes, he argues that urban farming will increase rather than cut carbon emissions.

James E. McWilliams argues that local food systems in water-scarce cities like Las Vegas and Santa Fe could only be created "through costly and environmentally damaging irrigation projects." The failed Saudi wheat growing experiment in the 1980s wasted hundreds of billions of cubic meters of water. The international price of wheat at the time was $120 per ton while Saudi wheat, reflecting these high resource requirements, cost $500 per ton to produce. In sum, food grown in accordance with the principles of comparative advantage and economies of scale should save resources and reduce carbon emissions.

Surely, fresh, local food tastes better? But what about the folk in the northern regions of the world, local farms will not deliver fresh fruits and vegetables in the middle of winter and lead to a less diverse and nutritious diet for part of the year.

Economists suggest that exploiting a region's comparative advantage in food production through specialization, and taking advantage of economies of scale, is the only way to efficiently feed the nine to ten billion people we can expect to inhabit the planet by 2050. In addition, specialization and trade is billed as a way to reduce geographic-specific risks, in the face of environmental and political change. Localised crop failure because of weather events or blighted by disease or pests could mean food shortages that today is compensated by relief efforts able to deliver the products of large-scale monocultures grown in distant lands.

Does those criticisms mean socialism will not encourage more food being growing for local consumption and still remain tied to the global food chain?. The answer is that it will only be with a socialist system that many of the faults of the locavore model can be overcome, when profits and the monetarisation of food is no longer a factor. Our ecosystem limits cannot be ignored and are not simply costs that can be traded off against commercial benefits. There exists many external costs such as the  production practices that routinely poison farmworkers, deplete soil nutrients, destroy rural communities, breed herbicide-resistant weeds, impoverish farmers, and contaminate waterways destroying marine life and biodiversity. The capitalist market is simply the means that coordinates production and distribution decisions through its near-magical capacity to gather information about consumers' preferences and producers' costs. Yet, looking at actual relationships between agribusiness and contract farmers, farm owners and farmworkers, food corporations and low-income consumers, the government and immigrant workers—gives us a clearer and better picture of who determines what costs and benefits are created in the food system and how these costs and benefits are distributed. Falling food prices attributed to comparative advantage and economies of scale may be related, instead, to the ability of the powerful to offload social and environmental costs onto the relatively powerless.

Socialism’s end goal is providing enough food for all while staying within ecological limits. It's possible to acknowledge the benefits of the existing industrialised food system without excluding an emphasis on local food. While knowing the farmers that grow your food may be worthwhile, but it's not enough. Only by having a clear view can we make informed, collective decisions that do not alienate or ignore important segments of the community. With socialism decisions to improve our food system will not come about through the market but by moving beyond the notion of shopping our way to a better world, either at the farmers market or the supermarket.

Sourced and adapted from here

Posted by ajohnstone at 2:55 am