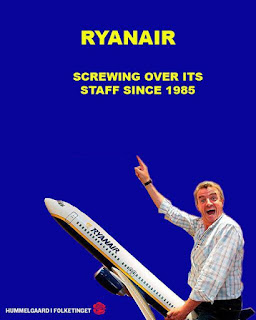 Ryanair says it does not negotiate with unions because for 30 years its people have preferred to negotiate directly with the company.

Jensen, of the Flight Personnel Union, said. “We don’t want a Ryanair society in Denmark, we won’t let them export it here.”

Ryanair is due to close its base at Billund airport an hour before unions plan to launch a full-scale boycott of the airline over its refusal to adapt to Denmark’s working conditions. Since introducing a service to Copenhagen this spring, Ryanair has come under sustained attack from unions and officials who have accused it of violating workers’ rights in the country. Copenhagen’s mayor banned city employees from using the airline because its low wages amounted to “social dumping”.

Ryanair held a press conference in Copenhagen last week at which some of its pilots praised their working conditions.  Unions claimed they were not on the same contracts as most Ryanair staff, who are paid worse. Other Ryanair workers went to the media with claims that in some months their wages were as low as €500 (£348), or less than half the salaries of local low-cost airlines.

Transport union 3F, which represents the ground staff, asked an external consultancy to compare working conditions at Ryanair with those of other airlines in Denmark. It concluded that the disposable income of Ryanair employees is 23,000 kroner (about £2,150), or 15%, lower annually for a cabin attendant. Unions claim the research shows that an extra 37 kroner – or £3.45, roughly half the price of a packet of cigarettes – on each ticket would be enough to pay for decent working conditions and a collective agreement that would uphold custom and practice in relations between unions and business in Denmark.

“Ryanair’s style is management by fear,” said Morten Windeløv, a Ryanair pilot from 2007-2011, and now a leading voice in the unions’ campaign, “There is a widespread disdain for employees, you are not treated with trust or respect as an individual – irrespective of whether you are a pilot or cabin crew.” Staff are ordered where to work and when to take holidays, and are under pressure to meet targets to sell merchandise, he claimed. Pilots compete to save fuel, with their performance disclosed in the crewroom for all their colleagues to see. “Competition at its worst in my opinion,” Windeløv said.

The unions won a legal battle last month when a labour tribunal ruled that they could take sympathy industrial action against the airline anywhere in the country, even though the unions have no members among Ryanair staff. By withdrawing its bases from the country, however, Ryanair would make any such action illegal – the carrier will continue to fly in and out of Danish airports, but with planes and staff based in Britain, Lithuania and Ireland. Its Danish staff are being relocated.
Posted by ajohnstone at 1:40 pm