Now, more than ever, it’s good to be the boss. As the economy, which cratered at the end of the George W. Bush administration, has improved since 2009, the average CEO of the 350 largest corporations has gotten a 54% raise and is making $16.3 million a year.
His employees, on the other hand, haven’t done as well, according to a study from the Economic Policy Institute. The average pay in those companies in 2009 was $53,200. Five years later, it’s still $53,200. That’s not to say it stayed the same—pay dropped in 2011 and 2012 before beginning to climb in 2013.
Looked at another way, the average CEO makes 303 times what his or her average employee makes. So that means if you work the year through October 30 with no days off, you’ll take home what your boss did while he nursed his New Year’s Eve hangover on January 1.
The study points out “That CEO pay grew far faster than pay of the top 0.1 percent of wage earners indicates that CEO compensation growth does not simply reflect the increased value of highly paid professionals in a competitive race for skills (the ‘market for talent’), but rather reflects the presence of substantial ‘rents’ embedded in executive pay (meaning CEO pay does not reflect greater productivity of executives but rather the power of CEOs to extract concessions). Consequently, if CEOs earned less or were taxed more, there would be no adverse impact on output or employment.”
The long-term view is even more depressing. From 1978 to 2014, average CEO compensation rose 997% when adjusted for inflation. The average worker’s pay increased a miserly 10.9%.
Ah yes, it IS good to be the boss.
From here 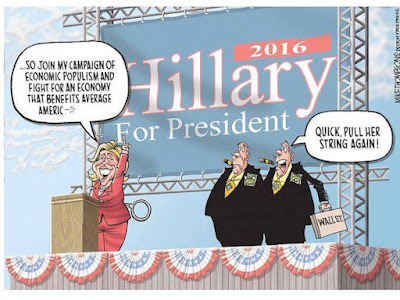 Posted by ajohnstone at 6:26 am