There's Marxists and then there are Marxists 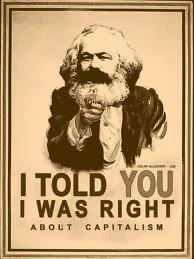 We read  this  report of a “Marxist” conference and can’t help but wondering just how Marxist it can be when it involves those “Marxists” who argues that one way “to break the current grip of Neoliberal, financial dominance would be if one country elected an authentic Left regime that changed the rules on the financial elites, or class or corporate owners, setting an example for other European nations to follow.” I wonder if Marx would agree with that sort of government legislation as a remedy against the contradictions of capitalism. If so, he failed to mention it in all his writings about the need for revolution.

We also read in the article:
“The creation of a parallel state to the existing state is easy to imagine.  It begins by campaigns to create alternative economic institutions such as popularly controlled banks and utilities, which citizen consumer power creates intermediary organizations that create an economic or energy foundation for an alternative economy... When investment is turned towards cooperative, green utilities and banks rather than the market, popular pressure from below will create both economic and political tools for even more systemic transformation.”

Andrew Kliman, a Marxist economist, has written on those types of proposed “alternatives”

Posted by ajohnstone at 2:52 am