Who are the terrorists?


In May 2013, President Obama pledged more transparency in a major speech on counter-terrorism policy. But Amnesty says that promise “has yet to become a reality, and the USA still refuses to divulge even basic factual and legal information.” 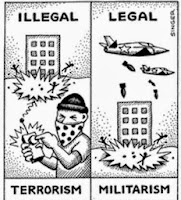 Amnesty International looked at 45 drone strikes in North Waziristan between January 2012 and August 2013. Field researchers did detailed investigations into 9 drone strikes in Pakistan. Amnesty found that an October 2012 drone attack killed a 68-year-old grandmother named Mamana Bibi while she was picking vegetables and was surrounded by her grandchildren. The group also looked at a July 2012 attack that killed 18 workers--including a 14-year-old boy--who were about to start eating. Missiles then struck those who came to help the injured from the first strike.
While the U.S. had claimed that they were “terrorists,” Amnesty’s investigation found no evidence for that assertion. “We cannot find any justification for these killings. There are genuine threats to the USA and its allies in the region, and drone strikes may be lawful in some circumstances,” said Amnesty’s Mustafa Qadri in a statement. “It is hard to believe that a group of labourers, or an elderly woman surrounded by her grandchildren, were endangering anyone at all, let alone posing an imminent threat to the United States.”

Human Rights Watch investigated six attacks in Yemen--one from 2009 and the others from 2012-2013. The group found that “ two of the attacks killed civilians indiscriminately in clear violation of the laws of war; the others may have targeted people who were not legitimate military objectives or caused disproportionate civilian deaths.” One of the strikes targeted a passenger van in central Yemen, killing 12 civilians. The reported target of the strike was nowhere to be found.

“The US should investigate attacks that kill civilians and hold those responsible for violations to account,” said Letta Tayler, the author of the Human Rights Watch report. “It’s long past time for the US to assess the legality of its targeted killings, as well as the broader impact of these strikes on civilians.”

A United Nations investigation has so far identified 33 drone strikes around the world that have resulted in civilian casualties and may have violated international humanitarian law.The report by the UN's special rapporteur on human rights and counter-terrorism, Ben Emmerson QC, calls on the US to declassify information about operations co-ordinated by the CIA.

Professor Christof Heyns, the UN's special rapporteur on extrajudicial, summary or arbitrary executions, warned that the technology was being misused as a form of "global policing".

Email ThisBlogThis!Share to TwitterShare to FacebookShare to Pinterest
Labels: terrorism