The Home Front and the Class War 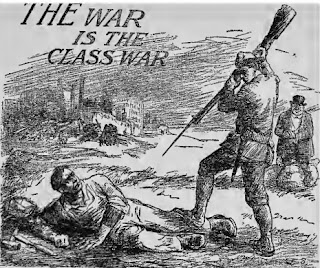 The armed forces were an expression of social inequality, with officers chosen from the privileged. They enjoyed higher pay, better food, even servants. Those in the ranks were treated as inferiors. What is rarely articulated is that the home front suffered the same division.

With many families left to cope without their main wage earners, the Government responded with "separation allowances" for wives. Unfortunately, the army's 300 administrative staff couldn't cope with distributing the money and payments were delayed for up to eight weeks, leaving some families having to pawn household goods to survive. Staff numbers were later increased tenfold but even when the allowances got through, many families struggled. From October 1, 1914, wives of soldiers in the lower ranks were allocated just 12s 6d a week - 52.5p in modern currency - plus up to 3s 6d deducted from their husbands' pay. A wife with one child was guaranteed a total of 15 shillings plus 2s 6d for each additional child. Although these sums were periodically increased, poverty was rampant.

Sylvia Pankhurst writing about the East End of London, said: "The rise in prices has simply wiped out the very narrow margin which separates the weekly budget of most of the families down here from the starvation level. Every day I find cases in which women and girls had no food at all for two or three days."

The allowances were only intended to cover half of a family's expenditure. The women were expected to work and some were virtually compelled to labour in one of the UK's 700 munitions factories.  At one factory, women worked seven days a week for up to 11 shillings (55p). In Glasgow shell-making plants, men were paid at least double the rate women received for the same work. The incomes of some working-class women did rise in time, but a huge increase in the cost of living meant few were better off. Within a couple of years of the outbreak of war, food prices had risen by 65%. In 1918, rationing was introduced for foods such as meat, sugar and jam. Clothes, shoes, furniture and coal were in short supply.

Former MP Shirley Williams points out “ families of six to eight children lived in cramped houses with outside lavatories, gas lighting and a cold-water tap for washing everything from clothes to bodies. For them the war meant a loss of breadwinners, long and often futile battles to get the pathetically small separation allowances for dependent wives and children, hunger and sometimes eviction for lack of money to pay the rent.”

Most wives lived with constant anxiety: news about their husbands was hard to come by as letters were censored and newspaper reports tended not to specify which regiments were involved in the activities reported. Few of those whose worst fears were realised received the news via telegrams, which were reserved for the wives of officers. Those of other ranks received a standard letter in a buff envelope - which sometimes didn't arrive until after the news had been broken through other means. Casualty lists were sometimes posted in public places.

The death toll was high. Widows were liable for small pensions with additions for children. But the pension was not always granted. A widow was refused because her husband died as a result of an army road accident and not in battle. The woman had to apply to "the Parish" for stigmatised relief.

Mary Barbour, Helen Crawford and Agnes Dolan were among the founders of the Women's Peace Crusade, which held rallies on Glasgow Green. These women are better known for their involvement in the Glasgow Rent Strike, one of the most famous chapters in the history of Red Clydeside. Accommodation was in short supply during the war, partly because house-building had come to a halt and partly because the Government moved workers into areas which had munitions factories. Private landlords took advantage by pushing up rents. Some tenants - including wives struggling to feed their families while their husbands were serving overseas - could not pay and were evicted.

The South Govan Women's Housing Association, with Mary Barbour in the lead, protested loudly. More than 20,000 - mainly from Govan and Partick - refused to pay rents and resisted evictions. When rent debtors were summoned to court on November 17, 1915, the protesting women were in such numbers that proceedings were halted. The Government panicked and quickly passed the Rent Restriction Act which halted rent increases until the end of the war. To be sure, after the war rents were raised again while the numbers of women in work declined as soldiers returned.

Things were different for the families of affluent personnel from the upper ranks. Wives were not compelled to work in munitions factories. They were not short of food, could feast in restaurants and hotels and enjoy holidays. Their sons at public schools were not made to abandon their education to labour on farms, and it was taken for granted that they would be officers. The only drawback was that some complained it was harder to get servants to clean their houses.

After the war, the politicians and top army brass received praise and honours, the owners of the private war companies were rich beyond their dreams. But the working women and their husbands never received the promised new Britain.

Posted by ajohnstone at 3:15 am