Carl and Karl On War 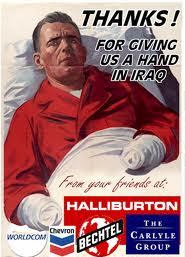 An article about war on the Alternet website makes good reading.Some Extracts:-

President Calvin Coolidge - “The business of America is business”

In the halls of Congress and the Pentagon, it’s business as usual, if your definition of “business” is the power and profits you get from constantly preparing for and prosecuting wars around the world...

...Following Marx, Americans ought to think about war not just as an extreme exercise of politics, but also as a continuation of exploitative commerce by other means.  Combat as commerce: there’s more in that than simple alliteration.
In the history of war, such commercial transactions took many forms, whether as territory conquered, spoils carted away, raw materials appropriated, or market share gained.  Consider American wars.  The War of 1812 is sometimes portrayed as a minor dust-up with Britain, involving the temporary occupation and burning of our capital, but it really was about crushing Indians on the frontier and grabbing their land.  The Mexican-American War was another land grab, this time for the benefit of slaveholders.  The Spanish-American War was a land grab for those seeking an American empire overseas, while World War I was for making the world “safe for democracy” -- and for American business interests globally...

....In societal calamities like war, there will always be winners and losers.  But the clearest winners are often companies like Boeing and Dow Chemical, which provided B-52 bombers and Agent Orange, respectively, to the U.S. military in Vietnam.  Such “arms merchants” -- an older, more honest term than today’s “defense contractor” -- don’t have to pursue the hard sell, not when war and preparations for it have become so permanently, inseparably intertwined with the American economy, foreign policy, and our nation’s identity as a rugged land of “warriors” and “heroes”...

...Most Americans are, however, discouraged from thinking about war this way thanks to the power of what we call “patriotism” or, at an extreme, “superpatriotism”  when it applies to us, and the significantly more negative “nationalism”  or “ultra-nationalism” when it appears in other countries.  During wars, we’re told to “support our troops,” to wave the flag, to put country first, to respect the patriotic ideal of selfless service and redemptive sacrifice (even if all but 1% of us are never expected to serve or sacrifice).
We’re discouraged from reflecting on the uncomfortable fact that, as “our” troops sacrifice and suffer, others in society are profiting big time.  Such thoughts are considered unseemly and unpatriotic.  Pay no attention to the war profiteers, who pass as perfectly respectable companies.  After all, any price is worth paying (or profits worth offering up) to contain the enemy...

....Forever war is forever profitable.  Think of the Lockheed Martins of the world.  In their commerce with the Pentagon, as well as the militaries of other nations, they ultimately seek cash payment for their weapons and a world in which such weaponry will be eternally needed.  In the pursuit of security or victory, political leaders willingly pay their price.

....If patriotism is famously the last refuge of the scoundrel, it’s also the first recourse of those seeking to mobilize customers for the latest bloodletting exercise in combat as commerce.

Just remember: in the grand bargain that is war, it’s their product and their profit....”