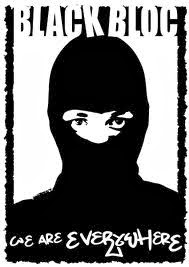 Coelho was one of thousands of teachers marching through central Rio de Janeiro to demand better wages and school conditions when police decided to disperse the demonstration.

"It was the Black Bloc that protected me in that protest," Coelho, 47, said at the beginning of a march last week that again descended into fighting between anarchists and police. "The police came in firing tear gas, hitting us with clubs. A young Black Bloc stepped right in between me and the police. If it weren't for them, the police would have destroyed us."

In the interviews with Black Bloc adherents, all repeated what's been heard in the U.S. and Europe before: They have no leaders, they operate in anonymity; there are no lists of demands for the government to meet. Their aim is to use action like destroying the property of multinational companies and confronting riot police to disrupt a political system they say doesn't allow for their participation and only represents entrenched economic interests. But as in Egypt [ see SOYMB earlier post here] and elsewhere, the Black Bloc in Brazil says it also exists to protect other protesters from heavy-handed police tactics.

The demonstrations in Brasil have lessened in size but not frequency since masses took to the streets in June, fed up with a litany of problems that mostly center on corruption, woeful public services, and big spending on the upcoming World Cup and 2016 Olympics.
Posted by ajohnstone at 3:33 am