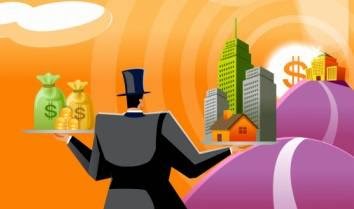 The 10 highest-paid chief executives in the US received more than $100 million-plus  each in compensation last year, and two took home billion-dollar paychecks, according to a leading annual survey of executive pay. All told, the top 10 CEOs in this year's poll took home over $4.7 billion between them. Nearly all the outsized gains came from stock options and other share-related compensation. The top 10 made $3.3bn in 2012 on stock option profits and the vesting of restricted stock. Cash bonuses totalled $16.2m.

Mark Zuckerberg, Facebook's co-founder, was America's highest-paid boss in 2012, according to GMI Ratings annual poll of executive compensation. Zuckerberg's total compensation topped $2.27bn – more than $6m a day. His base salary was $503,205 but the vast majority of his enormous pay package came from exercising 60m Facebook share options when the company went public last year.

Richard Kinder, the CEO and chairman of energy firm Kinder Morgan, had a base salary of just $1 in 2012 and received no other bonuses. But he made $1.1bn selling restricted stock. The payout follows a nearly $60m profit from stock in 2011.

Overall, GMI's poll of pay and other forms of compensation for 2,259 US CEOs found an average rise of 8.47%. For the Russell 1,000 – measuring the top 1,000 companies – it was 15.47%. The average pay package of an S&P 500 chief executive last year was $13.7m, according to GMI. For those in charge of S&P small cap companies, it was $3.5m.
Base salaries, bonuses and other forms of compensation were largely unchanged in 2012. The survey found that the outsized pay increases experienced by some CEOs came from the exercise of large blocks of stock options and the vesting of outsized restricted stock grants.

The report further illustrates the widening gap between CEO pay and that of the average worker. According to the US census bureau, median household income, adjusted for inflation, was $51,017 in 2012, broadly unchanged from 2011. Wages for the average household have fallen about 9% from an inflation-adjusted peak of $56,080 in 1999. From 2009 to 2012, average real income per family grew modestly by 6.0%, according to a report issued last month by Berkeley University pair Thomas Piketty and Emmanuel Saez. However, the gains were very uneven. The top 1% incomes grew by 31.4%, while the bottom 99% incomes grew only by 0.4% from 2009 to 2012. The top 1% captured 95% of the income gains in the first three years of the recovery.

The Top Ten
1. Mark Zuckerberg, Facebook – total compensation $2.27bn
The social network king received a base salary of $503,205 in 2012 and $1.2m in perks, including use of the company aircraft and security. But it was the sale of Facebook that made him his fortune. Zuckerberg profited nearly $2.3bn on his share options when the company went public.

2. Richard Kinder, Kinder Morgan – $1.16bn
The billionaire energy executive received just $1 in wages in 2012 – but more than $1.1bn in restricted stock profits. Kinder Morgan's share price has been falling this year on reports that the company has minimised pipeline repairs in order to maximise returns to shareholders – a characterization the company disputes.

3. Mel Karmazin, Sirius XM Radio - $255.3m
The veteran radio executive stepped down from running Sirius last December, and received a $9.5m bonus. His was the largest bonus in the 10 top-paid CEOs. But, again, it was his share options that handed him most of his compensation – 120m of them worth more than $244m.

7. Gregory Maffei, Liberty Interactive – $136.4m
With his Interactive hat on, Maffei exercised an additional 12.3m options for a profit of more than $132m. Added together his take from the two Liberty companies comes to more than $391m, third place overall.

9. Marc Benioff, salesforce.com – $109.5m
The cloud computing company billionaire made $106m of his yearly compensation from share options. Benioff now owns more than 42m company shares, or 7.2% of all shares outstanding, and was granted new options in the amount of $18.9m in 2012.

10 Frank Coyne, Verisk Analytics – $100.4m
Coyne, too, benefited from massive share options exercising 2.4m options for $95.7m. He stepped down as CEO of the risk assessment company this year and is now non-executive chairman.