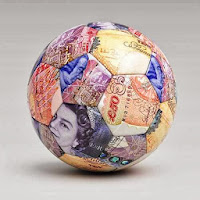 In the same year he retired from soccer at age 38, David Beckham made $47 million on and off the field, $5 million in on-field salary, but $42 million in endorsements. He has made $190 million off the field in his career. His personal fortune is estimated to be $267 million making him the richest soccer player in the world. He owns a $22 million estate in Beverly Hills with a 13,000-square feet mansion that has an ocean view. After he signed with Real Madrid in 2003, he bought a $12 million villa, dubbed "Casa Beckham." When he played for PSG in Paris, donating his player’s salary to a charity,  he stayed in a $21,000-a-night hotel with a personal butler. In 2008 he bought Victoria a vineyard in Napa Valley for her birthday. The couple recently sold their "Beckingham Palace" estate in England for $19.4 million. He has owned over 20 different cars in his career including a Bentley and a $400,000 Rolls-Royce convertible and bought a replica of Steve McQueen's Porsche 911 Turbo.

Cristiano Ronaldo earned $42.5 million last year, making him the ninth highest-paid athlete on earth. He just signed a contract that'll pay him $23 million per year until 2018 — making him the world's highest-paid player. He makes almost that much ($22 million annually) in off-field endorsements. His new Nike contract will pay him a rumored $8 million per year. If he ever leaves Madrid, the team that buys him will have to pay the club ONE BILLION DOLLARS in a buy-out. He owns a $300,000 Lamborghini Aventador. He also reportedly owns a Bentley, Porsche, and Mercedes, among other cars. In 2009 he crashed his $320,000 Ferrari in Manchester. He lives in a $7 million villa in La Finca— an exclusive community in Madrid built by architect Joaquin Torres.

Posted by ajohnstone at 3:55 am