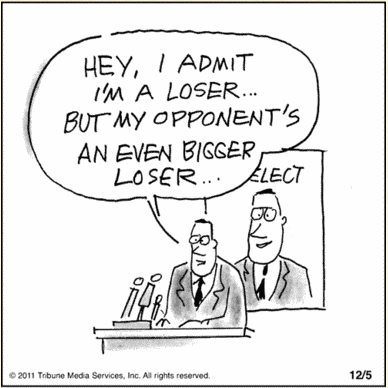 The bitterness and rancor of current politics may reflect the internecine disputes among the capitalists but ignores that that bosses and workers remain on opposing sides in the class war. Congress and the White House are owned almost exclusively by the capitalist class. Capitalist democracy is an illusion for most people spend their working lives conforming to the dictates of the employers. There is no ‘level playing field’. The American state sides with the rich in a class war against working people. Democrats, as well as Republicans, support government actions, agreements and institutions that are enacted with clear knowledge that they benefit industrialists and financiers, not the workers. The Democrats and Republicans are the Big Business tag-team, loyal to Wall St and the stock-market. Both are fully committed to a  ‘war of attrition’ is to make life so precarious for the poor and powerless. The American electoral system remains one of the most undemocratic with unaccountable courts made up of life-time appointed judges, power placed in the hands of an individual who can issue executive orders, gerrymandered voting districts and outright voter suppression to shore up a winner-takes-all electoral college system.

To the horror of the liberal and the progressive, the World Socialist Party has no preference in the upcoming election. We wish no return to what some claim to be “normalcy”.

Liberals and progressives have invariably referred to the Republican presidential candidate as a fascist threat. For Democrats the stench of Republican fascism is always in the air. Those worries continued through the years, ebbing and waxing. Today, they loom again with Donald Trump. Some on the left evoke the memory of Germany and the rise of Nazism in an effort to urge a vote for Joe Biden. Chomsky implies not voting for Biden may well be “the destruction of organized human life on Earth.”

The difference between the Weimar Republic of the 1920s and 1930s and the situation in 2020 America is that there is no fascist threat. Despite all the hysteria about “socialism” on Fox News, there is no sign that American workers are thinking in class terms, let alone radicalizing to become socialists. The U.S.A. has never had massive working-class parties like the German SPD or KPD. There is still no organized resistance from the labor unions. Regardless of the protests of the BLM, the American workers remain placid and docile.

There may exist a populist “Trumpism” but there is not the slightest indication of the American ruling class backing a coup as there is no threat to their profit-making from Biden. For sure, Trump has demonstrated shameless nepotism and installed his puppets in charge of various government departments and endeavors to pack the federal courts with his appointees, an age-old tradition for presidents and scarcely a signal that a coup is imminent. Nor are the diverse and disunited militias the core of any Brownshirt movement. There is not going to be any Mussolini “March on Rome”. The word “fascist” is thrown about far too loosely by the left as much as the term “socialist” is abused by the right.

A mass socialist party has be necessary champion for the cause of American workers.

Posted by ajohnstone at 7:34 pm