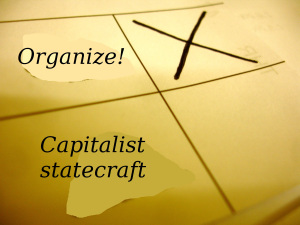 “It is infinitely better to vote for freedom and fail than to vote for slavery and succeed.” - Eugene Debs

We seem to be entering into a new period of serious economic and social crisis. While a socialist revolution seems more than doubtful, all working-class activities in defense of their own interests possess a potential revolutionary character because capitalism itself is always dysfunctional and unstable. Everyone faces the actual crises and has to react to them in some way or another but nobody can predict the dimensions or direction. Working people presently appear prepared to accept, within limits, austerity cuts, if only to avoid the miseries of drawn-out confrontations with the employers and the state. Yet all we are being offered is the choice between different cancers.

The fact that our class enemies fall out amongst themselves over what they consider the better policy in their overall interest does not mean we support them. The World Socialist Party is vehemently anti-capitalist, so we do not support the Democrats or their left-wing nor do we give support to those neo-fascists claiming to be anti-capitalists and anti-State. The socialist response is straightforward. If you want to get somewhere, aim for that destination directly, rather than going on detours and trusting that you will eventually, by a round-about a route, arrive at where you want to get to.

Working people cannot ignore the history of Democrats and Republicans working together to create institutional impediments that make third-party challenges well nigh impossible. Facilitating the will of the people does not correlate with excluding viable candidates although there exists widespread and historic loathing of the duopoly.

There are liberals who promote the belief that another Trump term would be an existential threat and at all costs he must be defeated. Shall we then forget that Bush oversaw the invasion and destruction of the Middle East and withdrew from Kyoto climate agreement, following his father’s example of invading Panama and Kuwait, that Reagan conducted secret corrupt wars paying the murderous Contras with drug money, invading Grenada, that Kennedy authorized the invasion of Cuba, LBJ’s escalation of the Vietnam War, or that the ‘saintly’ Jimmy Carter continued American support of the brutal Indonesian dictatorship and supported the Afghan Mujahideen, that Bill Clinton passed Wall Street-friendly financial rules and imposed draconian sanctions upon Iraq as well as crime legislation that led to mass incarceration of Americans, while Obama bailed out the corporations but failed to curtail the foreclosure of ordinary American’s homes and increased the deportation of illegal migrants and initiated a drone assassination scheme. Just who has been the greater evil? As for being Trump being dumb, wasn’t it Gerald Ford who was accused of not being able to walk and chew gum at the same time. Nor do not recall Bush being a great intellectual. Some liberals have a selective memory.

Although it's a favorite conservative media narrative to link Biden with the left-wing extremists, like Bernie Sanders and Alexandria Ocasio-Cortez, the fact is that the most common criticism of Biden was that he was not progressive enough. Most notably, he is not for
Medicare-For-All nor is he for AOC's version of the "Green New Deal." Conservative media continues the drumbeat that he is a "Trojan Horse" or that he will be led by "The Squad" - but those are all tacit acknowledgements that he (Biden) is not CURRENTLY adopting their policies.

There is an attempt to convince voters that Biden, eventually, will make a hard left turn. But, if elected, it's far more likely that the left of the party will have to move toward Biden - not the other way around.

Democrats and the Republicans are mortal enemies just one day – election day. Then we fight tooth and nail. The rest of the time it’s live and let live with them - bipartisanship.

Republicans accuse Democrats of collusion with BLM and Antifa to establish a socialist tyranny. Democrats accuse Republicans of marching with the Proud Boys and militias towards a fascist autocracy. Both sides accuse the other of planning a coup if they are defeated in the election. It is all  a distraction. Portraying the two-party duopoly through the lens of its extremist wings is misleading. It leads people to see the two major parties as more significantly different than they are. Hidden behind the spectacle of rhetoric is underlying class unity on matters of importance to Wall St. and the Pentagon.

While the many problems of Americans are systemic weaknesses of the capitalist system, the public political debates is on the likeability of Biden’s or Trump’s personalities - a character contest.

Sanctions against Venezuela, Nicaragua, Cuba, Iran, Syria, etc. – costing hundreds of thousands of lives – will continue whoever occupies the White House. The multi-trillion-dollar modernization of the US nuclear arsenal will continue. Private healthcare and health insurance profits remain guaranteed to be protected. Deportations of migrants will carry on. The wealth gap will keep on widening.

With unity on the major issues, the two parties of capital try to distinguish each other over their posture on gesture politics - tokenism. But what the two parties really offer is the choice between the good cop and the bad cop. For sure, Trump’s reign in the White House has been reprehensible but so was Obama’s deportations and drone assassinations, Clinton’s crime and welfare bills and both president’s sanctions policies. Let us not forget that it was the Democratic Party, not the Republicans, that defeated the Bernie Sanders soft-left program, first by Hillary and then by Joe. It is not the Republicans who have gone after the Green Party to exclude them from being on many of the state’ ballot. Biden/Pelosi/Schumer control the Democrats not Sanders/AOC. And the Biden alliance have birds of the feather on both sides of the aisle. There is little daylight between Mitt Romney and Biden.

Biden is now the preferred choice of Wall St who are lavishing funds upon the Democratic campaign, which is outspending Trump 2:1. The ruling class are well aware that they are the guaranteed winners whoever prevails right now the Democrats are perceived as better representing their interests.

“The revolution, which will surely come, will be peaceful. Not a drop of blood will be shed provided the socialists are allowed to control the situation. We will win by the ballot. We realize that we can do nothing until we have complete control of the government. We must have the Presidency and Congress before we can accomplish anything, and we will attempt nothing until we control these offices. Then we will simply take, in the name of the people, the means of production and distribution. They have been paid for, over and over again, by the people, and are ours by every moral right” - Eugene Debs