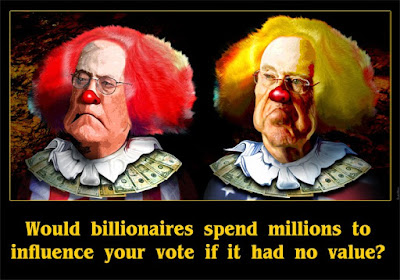 The Democratic Party (or as we like to describe them, the Damnocrats) is a party that embraces capitalism. It calls for the increased regulation but not the abolition of capitalism.

The hold of patriotic sentiment on the working people in America has created havoc on the development of class consciousness and played into the hands of the capitalists. The “revolutionary tradition” of American history can also be put to use for the advantage of working people not as the romantic idea that Americans are crusaders prepared to shed their blood for noble ideals of life, liberty and the pursuit of happiness but that the capitalist class did not hesitate to fight for its own class interests. This involves pointing out that George Washington with his 30,000 acres of land; that Hancock and Adams with their mercantile business threatened with destruction by laws passed by a British parliament in the interest of British merchants, acted in line with their class interests. And after the war was over they conveniently forgot their revolutionary principles, ensuring the new constitution which protected their property interests against the artisans and small farmers who had done all the fighting.

It is true that the average American worker does not usually feel a member of a poor, oppressed class but there is a growing impoverishment and insecurity under capitalism  Americans have convinced themselves (or perhaps more accurately, permitted themselves to be convinced) that electing a new president will change things. “It's gonna be different this time.” But it won’t be. Even when Biden becomes President, it would hardly matter, for his freedom of action is too restricting and he would have very little option but to accommodate the capitalist class and their agenda.  When he is elected there would be a number of cosmetic changes but the fundamental problem, capitalist property relations, would remain essentially unchanged. One of the tasks of Biden is to transform bothersome protesters back into a relative placid population again. Biden makes no secret during his campaign of his “moderate” political outlook. A central theme of his campaign, in fact, is the need for bipartisanism and many on the Democratic Party left view him as just another spineless Democrat. Biden  has never claimed to be anything but a “pragmatist”, which is a nicer way of saying “opportunist”. People have gone from the naïve view that Trump is the root of all evil to the equally simplistic idea that Biden could uproot that evil.

Once more there is the recognizable political cycle. For the sake of argument, let us suppose that Biden was a significantly lesser evil. For instance, it is argued, isn’t it worthwhile just to re-join the Paris climate agreement (just for the sake of debate, remember) to get him into office does ward off a greater evil. Some capitalist politicians are totally 100% subservient to the fossil fuel corporations and oblivious to the danger of climate change. In their hands we are doomed. Other capitalist politicians are a little less subservient, show a limited awareness of the situation, and try to do something to mitigate it. Something, although much less than what’s absolutely essential and necessary. Biden may take a less confrontational approach, but he still has to bat for US capitalist industry, arguing for the continued use of fracking, for instance. Once in office, Biden comes under irresistible pressure from his capitalist masters to break his “populist” promises, to disappoint, disillusion and betray the working people who placed their trust and hope in him. Some supporters sink back into apathy and despair, while others fall prey to the right-wing backlash. These reactions give the Republicans their chance to return to political power. Those who support the lesser evil play an essential role in constantly reproducing the cycle. They share the responsibility for its persistence. Support for the lesser evil also entails support – indirect and delayed, but support nonetheless – for the greater evil.

America badly needs a vigorous socialist party. America is a plutocracy, which means a government of the rich, by the rich, and for the rich. Everything supports that fact. The American working class have been fooled into accepting the concept of common interests wherein the problems of the capitalist class and the state machine are theirs also. The suggestion is that people in the US all belong to one of the world's mightiest military and industrial powers, sharing equally in the glory; so let's all work still harder to increase the arms and wealth of the rulers. The belief that there exists a community of interests from which we all derive common benefits is a mistaken one but nevertheless held strongly. Two crucial political fallacies permeate American workers thinking.

First, that the present system can be so organized that it will operate in the interests of the majority, through a process of applied reformism, and second, that ‘proper leadership’ is an essential requirement. However, neither of the foregoing will ever remove any of the major social evils and the socialist mission is to demonstrate that fact.

Without vibrant grass-roots movements changing reality, the richest people in power will keep on trampling upon the working class. We need BOTH activism on the streets demonstrating against specific grievances AND we need effective electoral action for social change. A powerful socialist party should be the conduit for change. Protests have often been aimed at the wrong target. Occupy Wall Street was a step in the right direction. We now need to go further. A socialist party is an organization which can connect the dots between issues and movements -- from winning justice for workers to fighting for immigrant rights to interacting with global social justice movements. We cannot afford to choose between the fronts upon which we must battle.