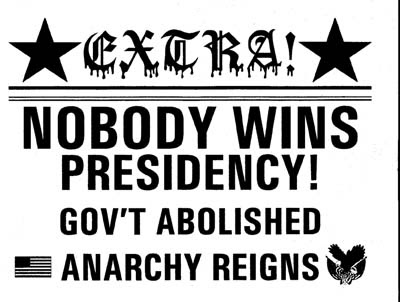 Capitalist politicians have only one way of dealing with a crisis: off-loading their burden on to the backs of working people. Why should any working person vote for any of the candidates in November? It is a choice between Al Capone and Bugsy Siegel, the Italian Mafia or the Colombian Cartel?

Peace, freedom and equality are what every ordinary American, black, brown and white, wishes for and needs. The liberation of mankind is the socialist’s task. The World Socialist Party has sometimes been accused of seeking to overthrow the American government using violence. When we are accused of this, our critics are implying that we want to abolish capitalism with minority support, that we want to impose the will of the minority upon the majority. The opposite is the truth. We believe we need to win a majority of the people to support a change in the system. Many people have a stereotyped picture of what a revolution is like. They say a revolution is barricades and insurrection in a armed take-over. It isn’t.

The Democratic and Republican Parties are owned by the capitalist class and stand for the interests of the capitalist class. The two-party electoral system masquerades as democracy in action. We have never really had a chance to democratically vote to change the nature of this capitalist system. Politicians are the goons for the corporations, Wall Street’s bought and paid for professional liars. We know we can be fooled by good actors and it is no coincidence that one president was ex-Hollywood and another ex-reality TV. Money buys power and influence. Think-tanks determine policy proposals. Lobbyists draft the legislation. All to profit the elite few, to protect the wealth and power inequalities, to divide and conquer any resistance. They ensure peripheral policies such as Confederate statues or mixed-gender restrooms take center-stage

To vote in this election is to prop up a corrupt criminal regime. Trump and Biden are perfect for King Capital.

They distract from the real issues confronting people and it allows the media to turn the political discourse into differences in temperament of their respective personalities. Trump and Biden are essentially puppets and figureheads of the real ruling classes; the billionaires, the corporations, and the investor class. The media insist you vote for the face and not the case. And the debate pivots around identity and gesture politics rather than a real anti-capitalist alternative. You take responsibility for your vote. Politicians promise a lot of things, but can any of them deliver? Never under capitalism is the answer. Any politician who sincerely and genuinely wanted to do good within the system is thwarted at every turn. The politician doesn’t change the system. The system changes the politician. After every election the poor get poorer and the rich richer. Politicians never deliver and always fail. Further, any agreement, any compromise, any concession can be undone and rolled back by the next administration.

About half of eligible voters won’t cast their ballot. So in every election the president is not wanted by the majority. People literally refuse to opt for either candidate for president. How can a system based on capitalism be democratic? It’s fundamentally impossible. Nor can one have political democracy without economic democracy.

Society can only progress and evolve with democratic control of the means of production. It’s that simple. All societies that use money have inequality. There are no examples of long lasting peaceful societies that use money. It’s an eventuality that wherever money is used, unnecessary suffering will be sure to follow. Money literally buys the earth in our system, and the people who possess the most money are holding the planet hostage. We are taking part in an election for people who think it is okay to own people and the planet.

The sad truth of the matter is that the vast majority of us are serfs pushed deeper and deeper into debt with various forms of rent that must be paid to landowners, utilities and food corporations. Our employment is to serve the parasitical and ravenous appetites of the rich who use all imaginable methods at their disposal to coerce and dominate us. The capitalist system is a demeaning and degrading master-slave system. On November 3, people will be deciding who holds the whip.