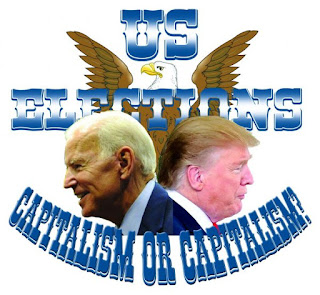 The Republican and Democratic parties are together as one in their allegiance to Wall Street and capitalist corporations; they draw their campaign funds from the same source and have mortgaged their policies to their donors, the economic masters of the working class and the real political rulers of the nation. A vote for either of these parties is a vote for plutocratic mis-rule and the continued domination by the oligarchy. Every millionaire or billionaire in the land is in the Republican Party or the Democratic Party. They are the enemy of socialism for the very reason that socialism is the enemy of them. The Republican and Democratic twins are for the corporations and against the people. The Republican and Democratic parties are maintained for the same purpose, and that is to serve Big Business, and if the Democratic Party secures the presidency, it will be just as subservient to business interests as the Republican Party has been under the administrations of Trump. More and more Americans, opening their eyes to the real situation and looking at the record of the Republican Party and then at that of the Democratic Party, and now declare : “A plague on both your house.” It is time to turn towards the revolutionary socialist movement that can usher in a new era of for all mankind.

Some of the boss class realize that the rule of the Republican Party has become so rank and rotten with Trump that it is time to switch over to the Biden for a fresh lease of power. The capitalists need the Democratic Party for that very business, or it would long since have ceased to exist. The American working class have been shouting for the Democratic and Republican parties. They have been voting the capitalist parties. They have elected the same political parties into power whose mission it is today to protect and advance the class interests of capitalism. The politicians court you and flatter you before the day of the election; after election day they once again detest and despise you. Both are the tools of capitalism. The cause of the Democratic and Republican parties is a bad cause, a rotten cause, based on the principle of deceiving the working class for the purpose of enabling the ruling classes to continue their system of exploiting and robbing the toilers. Are you not ashamed of voting for the Republican or Democratic candidates? We want you to fight for the freedom of your own class and join the working class party, which is the World Socialist Party.

The ballot at election times expresses the people’s will. It gives people a voice. Centuries of struggle and sacrifice were required to wrest this freedom from tyranny’s grip. The abuse and not the use of it is responsible for the evils its critics ascribe to the electoral system. The Republican Party is the representative of the capitalist class. Prosperity galore; give us four more. The Democratic Party is the wailing cry of calamity without end. The modern wage worker remains the wage worker, and there is no possible escape and even under the influence of Democratic or Republican oratory, the day is to dawn when he will realize he or she will be anything more than a wage worker. What excuse can be given for voting to perpetuate a system — and both the Democrats and Republicans stand for the same — by voting for a system under which you are robbed and impoverished and enslaved, and servitude imposed? The existing capitalist economic system is the system they are pledged to preserve and perpetuate and which the World Socialist Party is pledged to abolish. Corporations are organized purely for private profit; the rights of the corporations to exploit the working class and exact tribute from the people are to be respected, according to both the Democratic and Republican presidential candidates. The Republican and Democratic parties are in favor of the private ownership of the means of production and distribution. they are in favor of the existing wage system. There is absolutely no difference between them. The World Socialist Party, stands for the common ownership of the means of production, and declares to the world that there is no other solution of this economic problem. We hold the vision of a land without a master, a land without a slave.

Marvelous. All of what you have written is correct but the question remains how does the working class get there? This is what the Socialist Labor Party answers - Socialist Industrial Unionism. The unity of the working class is essential. That unity can only reside in a clear idea of an economic organization that has the ability to "take, hold and operate" the means of social production. Otherwise, advocating socialism falls by default into a purely political realm and political legislation is not going to produce socialism. Please offer some clarity as to how the working class is to establish socialism. Thanks

And many individual members have been sympathetic to the Industrial Workers of the World.


The idea of forming a separate socialist union, as the SLP in America tried to organise, was rejected in favour of working within the existing unions and trying to get them to act on as sound lines as the consciousness of their membership permitted. The logic behind this position was that, to be effective, a union has to organise as many workers as possible employed by the same employer or in the same industry, but a socialist union would not have many more members than there were members of a socialist party. In a non-revolutionary situation most union members would inevitably not be socialists but would not need to be. A union can be effective even without a socialist membership if it adheres to some at least of the features of the OBU or the IWW.

Trade unions are vital organisations of the working-class. United action is a day-to-day necessity. Political and religious beliefs are put to one side otherwise the union would be split, action would be impossible and the workers paralysed. No worker, whether socialist, Labour Party supporter or Tory voter; black, white or brown, catholic, protestant or hindu; wants his or her wages reduced. No-one wants to toil harder for longer hours. Therefore we all unite against the employers. Trade unions unite both revolutionaries and reformists in the common struggle over wages and conditions. Unions were invented for one reason only - to represent the interests of its members.

Within the trade union movement a single organisation, the One Big Union/IWW, would give them extra muscle against the employers. The primary need of the workers is unity instead of being separated according to their trade or occupation. A divided working class makes itself easy prey for the capitalist. To demonstrate our power we must stand together. In regards to the unions, the Socialist Party has supported unity and opposed setting up of "politicalised" breakaway unions once instigated by the De Leonist SLP industrial unions or the Communist Party’s “red unions”, even though some of our own members as individuals have been involved in breakaway unions in the past.

More specifically, Socialist Labor Party, their view that the industrial union is the only means of taking and holding industry, is not the view of the Socialist Party.

The SLP have always overly emphasised to what they term the “political arm of labor” is seen here in its true colors. A study of history will show that control of economic resources is only made secure by control of the State.

It is impossible for the working class to take and hold industry as long as the state is in the hands of the capitalist class. All the industrial unions in the world are powerless in face of the armed forces of the modern states with their machine guns, bombing planes and poison gas. Moreover, this power is placed in the hands of the capitalist class by the workers themselves. To expect these workers to do two diametrically opposite things simultaneously, is going it a bit too strong. On the economic side the working class is weak. They are propertyless. They own nothing but their ability to work, which they must sell to the capitalist class in order to live. The objectives of a union are confined to questions of hours, wages and conditions, problems within the four walls of capitalism.

A union, regardless of type, to be effective today must depend primarily on numbers rather than understanding. But there is a case for De Leon's "sword and shield" analogy where both the political and economic organisations back one another up and which is which being dependent on the circumstances being faced.