The Blue Tweedledum and the Red Tweedledee. 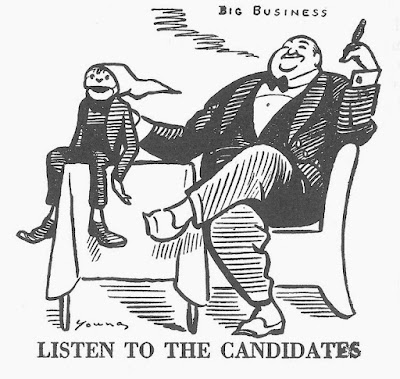 Calvin Coolidge, the 30th president of the United States (1923-1929), was once asked about the functions of government. His reply was, "The business of America is business." What he meant was that the business of government is to serve business. Coolidge was only expressing differently what was written in "The Communist Manifesto":

"The executive of the modern state is but a committee for managing the common affairs of the whole bourgeoisie."

The president is merely the CEO of the committee in charge of America Inc. The president carries out the program of the ruling class.

The Presidency, the Senate and in the House are where capitalism revealed itself in its true nature. They are the institutions for the protection of capitalist interests and for the keeping of the workers in subjection. Under capitalism, real democracy is never possible, not while the men of money own the media, control the schools and colleges buy the Washington establishment and choose the White House occupant through their economic power.

The World Socialist Party argues that there should no longer be a Congress of capitalist politicians elected by boss money – no more lobbying by big business – no more big business revolving door to the seats of government – no more commercial interests dictating to politicians.The expropriation of the capitalists and the common ownership of industry under democratic control is the fundamental solution. Who is better able to organize society for production than the producers? Who knows machinery better than the machinists? Who knows mines better than the miners? Who knows land better than working farmers? Who knows the problems of education better than teachers? Who is more competent to represent a factory than those fellow-workers chosen and elected by their colleagues and subject to the same control as any other elected representatives. Technicians, engineers and other workers indispensable to industry, have all the knowledge required for production. Manual and brain workers could thus run and control every department and phase of industry, public service, education and the whole of community life, both locally and on a global scale.

The workers suffer want and deprivation while warehouses are bursting with commodities that the unemployed and under-paid workers are unable to buy. The goal of socialism is not merely abundance, security, peace and freedom, precious as they are. Socialism is not merely the remaking of the social system and of the world – it is the remaking of mankind itself. Socialism can provide the basic needs of the population and to plan and achieve an ever higher level of civilization and culture for the people. Throughout our existence human beings have been an species sharing with all other animals one common need: the necessity of spending the greatest portion of his days and thought and energy on the job of filling our bellies so that we might be able to live to work another day. Mankind still works to eat and eats in order to work in an endless chain. Directly and indirectly, and not only during the hours of direct labor, we still live on the animal level for all our computers and science, cars and televisions. Human society can reorganize itself for the peaceful development of the gifts of nature and of the ingenuity of the human race. In a socialist world of plenty, humanity is at long last freed of the dominance of economics, the tyranny of economics. We will for the first time be free to develop the full potentialities and capacities of the human individual, and see the full flowering of mankind’s spirit. This is the only goal worth fighting for today. It is the real freedom.

In words as well as deeds the Democrats and Republicans are clearly  ordinary capitalist parties. It is Blue Tweedledum to the Red Tweedledee.

There is a good reason for this. The “lesser evil” argument is invalid because it assumes that what a government does depends on the good or bad intentions act, and their priorities, is the workings of the capitalist system. Capitalism is based on the concentration of wealth in the hands of a privileged few. Under it production is carried on for profit. The world is divided into a number of capitalist states all of which are competing against each other to sell their goods on the world market at a profit.  This is why it does not matter which party forms the government; in the end all governments are forced by economic circumstances to pursue basically similar policies. Any party which takes on the management of capitalism is bound to act against working people.

The World Socialist Party indicts capitalism and challenges any spokesperson of capitalism to defend it.