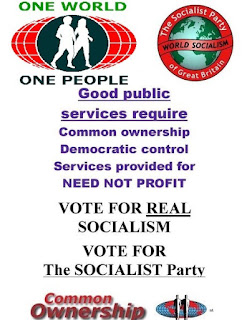 In the Socialist Party we make but one stipulation, and that is that its members must be socialists.  Socialism is when the means of production are held in common by all, and the word “community” will have a real meaning. In a class-free system, costings departments and board-rooms will have no place. It will not be necessary to calculate costs in order to maintain profits when society is no longer concerned with monetary systems. Under capitalism, the first consideration is ‘‘Will it sell?” "Will it be profitable?” With socialism, the first and only consideration will be human well-being, the democratic organisation of production for use on the basis of free access. When workers begin to understand their true position in present-day society and start to see the need for socialism, they will not be so easily deceived by capitalist propaganda. They will view the internet, read the press, listen to the radio and watch films and television in the light of their growing class-consciousness. The days of production for the profit of a few will then be on the way out.


Competition will be replaced by co-operation. No burden of want, no struggle to keep the wolf from the door, will be required to make men and women do the work and carry out the tasks necessary in the interest and for the well-being of society. Moreover, no material want will drive men to commit anti-social acts, theft or murder, or suicide. With the disappearance of capitalist competition and the fight over markets, which unleash the lowest human passions, the soil on which the commercial “virtues” of greed, jealousy, mistrust. lying, fraud, hypocrisy, corruption, adulteration and swindle of all sorts thrive, will have been uprooted. And therewith—and most important of all—the cause of wars will have been removed from the face of the earth.

There will be NO wages under Socialism; there can be no payment of any kind since money and buying and selling will have no place. The reward for your activity will be the guarantee of a life worth living for everybody. Your reward will be free access to all means and amenities of life, including all its cultural possibilities. What greater reward can there be for work and service, even for the exercise of what is called talent or genius than the pleasure and enjoyment derived from it by the individual, and the acknowledgement and appreciation by your fellow men and women? Here, indeed, in this admiration and appreciation, is room and incentive for ambition! Though never will, nor can, a modest average or minimum contribution, physical or mental disability or incapacity, whether on account of illness, accident or otherwise, jeopardize or forfeit the guaranty of material existence for any member of socialist society.

Stripped of their commodity character as things sold for a price, all material things capable of ministering to human wants and desires will have none but use-value. Thus in determining the individual's consumption, no considerations of “cost” or “price” can play any part, since these concepts will have been relegated to the limbo of the past. There can be no question under socialism of apportioning such and such amount to individuals by some “authority” for work done, time spent, services rendered, or such like. Whatever kind or aspect of human needs and desires there may be. whether in the domain of food, clothing, housing, education or the care of children, the sick and old, cultural aspects, hospitals, travel and transport, everything will be a matter only of production technique and organisation, since financial or private interest considerations of any kind will be out of the way.

The Socialist Party will be contesting in this general election, Cardiff Central and Folkestone & Hythe. The candidates are Brian Johnson and Andy Thomas. The candidates and their organisation stand in complete opposition to the Labour and Tory parties, also the Lib-Dems, Brexit Party and nationalist parties

Our purpose in putting forward these two candidates is to give working people an opportunity of casting a vote against capitalism, the system which we claim gives rise to all the social problems and misery of our day, and casting their votes in favour of socialism. 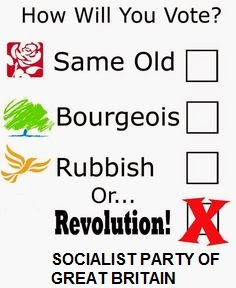