There Is Only One Solution – Socialism

The Socialist Party campaigns for peace, freedom, security and plenty for all, we are advocating socialism, which alone can guarantee these benefits. Under capitalism or the profit system, it is necessary to maintain and, if possible, increase the gap between wages (or what it costs in labour power to produce goods) and price (or the exchange-value which those goods have on the market). This gap exists because the worker only receives the price of his or her labour power and no share in the values he or she creates. In socialism, there will be no wages at all. There will be no prices or market values.

Every struggle, even for the most elementary demands, finds the workers confronted with the government sitting as the executive committee of the ruling class. Every struggle is immediately transformed into a political struggle. To refuse to recognise this fact and draw the proper conclusions is to invite disaster. The Socialist Party is an organisation of hope for the future. No other party holds out hope for the peoples of the world. All the counsels of others lead to despair. There are no greater optimists than we in the Socialist Party. Our politics is not the same as shabby dishonesties and opportunism of capitalist politicians but the struggle to raise the political consciousness of fellow-workers.

Dangerous and deceptive is the despairing resort to “patriotism.” Statements about “serving” the nation, the country, the community, have also to be carefully guarded. The notion that the country is “our” country – i.e. everybody’s alike, that there is such a thing as nation or community, a mystic something to which we belong and which protects us, is cultivated by the ruling class for the purpose of hiding the fact of class cleavage, of exploitation for the purpose of making the worker think that when he goes to war he is fighting for “his” country, instead of against himself and for the capitalists. In a time when patriotism is the dominant emotion upon which capitalism calls in order to fasten the chains of reaction and terrorism upon the masses, we must not fall into the trap of arousing sentiments upon which the demagogues can in any case play much more effectively than revolutionists can, and which in the end can only be used to destroy the revolutionary movement. The hold of capitalist,  nationalistic symbols upon the workers must, however, be broken, not confirmed. The revolutionary movement must, therefore, have its own. They must be such as to bring forward the idea and strengthen the emotion of class – the working class against the capitalist – and consequently the idea of labour internationalism against middle class nationalism. To break the hold of false ideas, is difficult enough at best. We should be foolish Indeed to make the task still more difficult by using symbols which might confuse the workers, which do not clearly and uncompromisingly suggest loyalty to class, loyalty to the world-wide brotherhood of labour, and not to any lesser cause!

Religion, too has a great hold over men and women. Religion, its institutions and symbols, have been used as supports of the existing order. Religious institutions are a bulwark of the existing order. Keep the minds and emotions of mankind bound to religious ideas and symbols, and you keep them bound to the existing economic and political order. The hold of those ideas and symbols must be broken.
The State, the governmental system under which we live, is likewise an agency and bulwark of capitalism. We have to overthrow the capitalist state. But that means that we must break the bold of the symbols and the emotions that attach to the present state.

Very complex technical problems are involved in the problem of taking political power and likewise in the job of keeping the machinery of production and distribution going after power has been taken, in a highly industrialised nation. The capitalist story is that “after the revolution” chaos, distress and so on are inevitable because unskilled and inexperienced workers will be running the trains and power stations, making plans for bridges and ships, etc. The story is of course, absurd. It fails to take account of the great competence of the masses of the workers themselves.

Who has constructed this country’s vast productive plant anyway? Furthermore, this capitalist tale makes no mention of the fact that technicians and scientists are constantly thwarted under capitalism. They are given scanty funds unless immediate profit is in sight from their work. Countless inventions and discoveries go unused because it would not “pay” the private capitalists who own them to put them to use. The revolutionary party will make it clear that it is well aware of the delicate nature of the technical tasks which the workers must carry out, and that so far from standing for inefficiency and anarchy, it is precisely the socialist economy under society’s control which alone will give full scope to science and will effectively plan for human welfare.

Under capitalism, the worker, at the end of the work week, receives wages which simply go to refurbish him for another Monday. Sunday is the day of rest (if you’re lucky and don’t have to work on Sundays, too), when you try to feel as strong and able to work as you did the Monday before. And so it goes on for the worker under capitalism – a continuous but tapering spiral, with the worker never quite catching up to his strength of the week before, but always forced to go to work on Monday, anyway. With socialism, all this is changed. Goods are produced for use and NOT for the profits which they bring in to bosses. Labour power is no longer regarded as a commodity to be bought and sold. It is not purchased at all, let alone purchased at the lowest possible price to keep it alive and able to produce more value. People will work and produce useful goods. But they will produce these for their mutual needs and for their mutual development. The sufficiency of goods which people and machines can create will be given to people to develop their bodies so that their minds can grow rich in the wealth of human knowledge and artistic creation. From day to day, from week to week, and from year to year, the spiral of possible individual activity will widen rather than taper, as human productive and intellectual achievements increase. Mankind, no longer fettered by the necessity of working not only for their own material maintenance, but for the bosses’ even more material profits, will be freed to live more fully. The time that each must work will be small, yet the goods produced for all to enjoy will be plentiful. Then, surely, will he who even thinks of “reasonable fair profit” will be jeered at as someone out of the past dark ages. He who talks about prices chasing wages will be talking gibberish, for men and women who have been freed from the capitalist system will also have been freed from wage labour, price and profit. That is why, instead of the conservative motto, “A fair day’s wage for a fair day’s work,” workers must inscribe on their banner the REVOLUTIONARY watchword: “Abolition of the wage system!” Socialism is the ONLY answer! 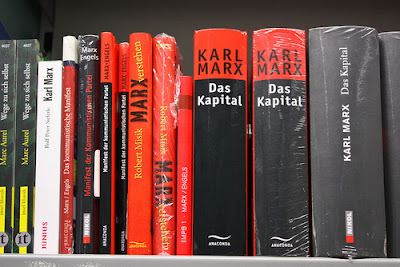