Don't vote for your masters

Unlike the usual election manifesto, this is addressed to those who do not a vote as well as to those who do. Its object is to gain, not your vote,but your understanding. It is evident that none of the is worthy of your support. Your party should be democratic. It should have socialism as its programme and the class struggle as its guiding principle.  Its candidates should be controlled by the rank and file. It should devote its energies to converting the workers to socialism, and to organising them for the conquest of political power for its realisation. It should never compromise with capitalist parties, and should refuse to barter away the workers’ salvation for crumbs that profit not. That is the party that you should support. Only one party answers to that description in this country—The SOCIALIST PARTY.

But since the ground must be well tilled before the good harvest can be reaped, that party is putting only two candidates forward during the present election, Brian Johnson in Cardiff Central and Andy Thomas at Folkestone & Hythe. Even the poverty which impedes the activity of the working-class party is in itself only a reflex of the present unreadiness of the electorate. Therefore the principles of socialism must be more widely propagated and the workers more fully organised, before candidates of the Socialist Party can usefully enter the parliamentary arena.

if you realise that your policy must be distinct from and hostile to all capitalist politics and that socialism alone can help your class, then it is your duty to join the Socialist Party and take a democratic share in its work; thus advancing the day—not far distant—when it will place its own candidates— your candidates—in the parliamentary field to wage uncompromisingly the fight for socialism. But until you can thus vote for yourselves and strike a blow against exploitation, it is clearly your duty to spoil your ballot-paper. To do otherwise would be to support the system that crushes you.

Go to the polling station but only to write 'Socialism' across your voting paper; for if you cannot vote now for what you want, it is folly to vote for what you do not want. The vote, like the razor, is an instrument for a purpose. If you cannot for the moment use it to your advantage, it is madness to cut your throat. And by voting for your enemies, for traitors and charlatans, you are surely cutting your throat.

However, whether you have a vote or not, realise how much depends on you and how much remains to be done. A vote, even for a candidate of the Socialist Party, is of no value unless it expresses a socialist consciousness. Understanding must precede action, for socialism is impossible until the workers become class-conscious socialists. There is, therefore, work for you to do. There are outlets for your energy infinitely more profitable to your class than voting for the defenders of exploitation. The army of socialism must be recruited, and your place is within the ranks of the organisation of your class, taking your part in the battle in the class war for the emancipation of your fellow-workers from wage-slavery. 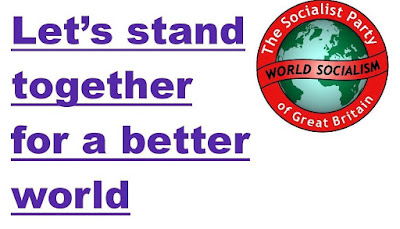