Of course it is nothing of the kind. It is merely an attempt to put the clock back to the 1970s when there were council houses and nationalised utilities before Thatcher set out to undo all that the post-war Labour government had done. If Corbyn is a “socialist revolutionary” then so would Attlee and Harold Wilson have to have been too. But nobody called them that.


A real socialist revolution would see all productive resources transferred to the community so that they could be used, under democratic control, to directly satisfy people’s needs, both as individuals and as a community. There is nothing about that in Labour’s manifesto,


Someone on the BBC got it right when he described Labour’s manifesto as “radical reformism”. That’s more like it.  Not that capitalism can be reformed to work in the interest of the many. All Labour governments, as government working within the framework of capitalism, have ended up imposing austerity through, for instance, “wage restraint” and “wage freezes”.
We’ve seen the past and it doesn’t work.
ALB 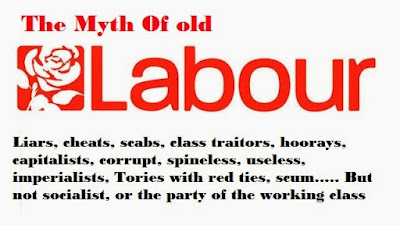 Posted by ajohnstone at 4:28 am