German Development Minister Gerd Müller expressed concern over the high rate of population growth in Africa and said that the continent needs to improve women's access to education, healthcare and childcare to bring the fertility rate down.  He praised Bangladesh for its success in birth control and presented the country as a role model for Africa.

Bangladesh, a  Muslim-majority country and home to over 160 million people has brought down the fertility rate from about seven births per woman to 2.06 births per woman,over the past 50 years.
The increase in literacy rates over time has also had a positive impact on lowering the fertility rate. They realized that a small family is better when one doesn't have the capacity to feed a bigger one.  People became  aware of the benefits of having fewer kids, by pointing out that it helps parents to take better care of their children as well as causes less of a financial burden.  Better healthcare services in rural areas also reduced the child mortality rate. This decline has contributed to a drop in the fertility rate, as people began to worry less about child survival.  Bangladesh has been providing free contraceptives to women for decades. Only 8% of the nation's total population was using contraceptives in 1975, but the figure increased to 63.1% by 2018. Women who opt for long-lasting forms of contraception get it free with necessary medical care afterward.
https://www.dw.com/en/german-minister-hails-bangladesh-over-birth-control/a-51229872 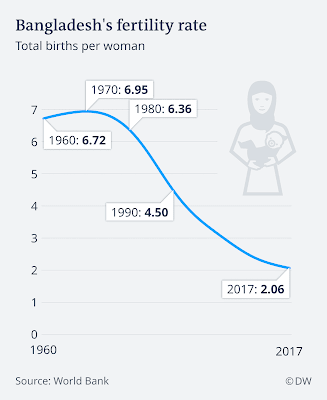