Can Capitalism be Fixed? 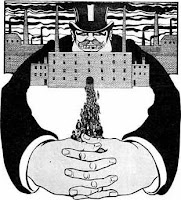 Apologists for capitalism cannot evade the palpable fact that capitalism does not serve the interests of humanity, so they try to redefine capitalism into something that they wish to be a kinder and gentler form of economics.

Prof Colin Mayer, author of a new report on the future of the corporation for the British Academy, says that global crises such as the environment and growing inequality are forcing a reassessment of what business is for.

"The corporation has failed to deliver benefit beyond shareholders, to its stakeholders and its wider community." he said.


"At the moment, how we conceptualise business is, it's there to make money. But instead, we should think about it as an incredibly powerful tool for solving our problems in the world." He said the ownership structure of companies had made the UK one of the worst examples of responsible capitalism.  "The UK has a particularly extreme form of capitalism and ownership," he said.  "Most ownership in the UK is in the hands of a large number of institutional investors, none of which have a significant controlling shareholding in our largest companies. That is quite unlike virtually any other country in the world, including the United States." This heavily dispersed form of ownership means none of the owners are providing a genuinely long-term perspective on how to achieve goals while also making money.
One thing he believes is the need to rewrite the Companies Act to specifically enshrine directors' duties to other stakeholders in law. Currently, the Act says that other stakeholders interests are subordinate to shareholders.  What he doesn't agree with is the demonisation of billionaires: "It's not obscene to make a lot of money in the process of creating real solutions to the problems of the world."
Prof Mayer agreed that the Labour manifesto was bold in its ambition, but said it was too traditional and old-fashioned in its way of achieving its aims.
"It's very much focused on one particular means of delivery, that is through the state," he said. "Now, the state has an important part to play. But we should think about the state in a more imaginative way, as to how it can promote successful business, how it can reform the nature of business in society. That's what we're really looking for."
Not everyone agrees, of course, that the pursuit of profit, within the confines of the law and social norms, is bad. Matthew Lesh, from the Adam Smith Institute, says we should be cautious before we dismantle a mechanism that has produced innovation and a rise in absolute living standards.
"The profit motive has raised literally billions of people out of poverty by encouraging innovation and ensuring our finite resources are used exceedingly productively," he said. "Mandating alternative purposes for business raises more issues than it solves. It removes the essential accountability between shareholders, whose investments are at risk, and corporate executives."
Since it first developed, capitalists have been required to justify the structure of capitalism in face of the fact that it has not ended poverty, that it has not supplied the needs of the people or the planet, that it has repeatedly thrown the world into chaos with recurring recessions and repeated wars. The flaws and faults of the capitalism system  cannot be denied so the "experts" futilely seek ways to reform it so it operates smoothly. A humane capitalism has never been achieved since all its problems are inherent within it. Capitalism cannot be capitalism without the contradictions it holds.