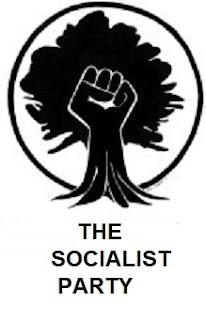 The Socialist Party shows why socialism is inevitable and necessary, and it describes what it is and how it can be achieved. Capitalism uses a new and much more efficient method than the lash to make the workers slave. That is hunger. We are told that we are free and the bosses are free. He is free to offer us terms of any kind – we are free to starve unless we accept these terms.

As we work, we create profits, such huge profits that even in their wildest extravagances the bosses cannot spend them. So there proves to be no more market for that commodity we are hired to produce; no more profits can be gotten so the free boss lays off the free worker to freely starve in the midst of a land of full warehouses which the worker filled. Capitalism, greedily demanding more and more profits, puts faster machines into the shops which produce goods and profits at a faster and faster rate. More workers are thrown on the streets. Capitalism will be replaced by employment and plenty for all. The struggle of the masses for a new life, for a socialist society of plenty for all, will go on until victory is won.

As a socialist party devoted to the abolition of the capitalist system of profit and exploitation of the people, we defend the interests of oppressed people the world over, showing how these interests were common to all who labour. The Socialist Party will continue its great aim: to help raise workers consciousness to a socialist level, to seek the abolition of the rotten system of capitalist exploitation, to end poverty for the millions. It will fight for a socialist society of plenty for all. The principal task of our organization is EDUCATION and AGITATION, that putting forward of the single idea of socialism to the largest possible section of the working class. They are aimed at raising the class consciousness of our fellow-workers.

Socialism cannot be introduced without a well-organized public opinion supporting the Socialist ideal. Whether that support is won at the ballot box or via another method is not so important as that it be won. One thing is very evident. If we cannot get people to vote for our party, there is little hope of getting them to take up force on behalf of our cause. It may be too early to decide definitely what course we shall finally have to pursue to gain the socialist commonwealth. But there can be no harm in getting as many votes at the ballot box as possible. Good socialists elected will certainly advance the cause meanwhile. It is absurd to claim that the Socialist Party is merely an organization designed to win votes on election day. We have never taken that position either publicly or privately.

But, when it engages in an election campaign, that is its primary task for the moment. On every occasion we stated our case for socialism. as long as the ballot can be used, even under difficulties as it is today, it should be used. That is why we look forward to bigger and better socialist election campaigns. And that is why we ought to begin now to organize for work on the political field. And if that method proves ineffective, or is withheld from us in the future, we shall still have to go forward until we do gain the socialist commonwealth by the best means at our command.

Nature has spread a great table bounteously for all of the children of men. There is room for all, and there is a plate and a place and food for all, and any system of society that denies a single one the right and the opportunity to freely help himself to Nature’s bounties is an unjust and iniquitous system that ought to be abolished in the interest of a higher humanity and a civilisation worthy of the name. As long as a relatively few men own the transport, the media and communications, own the oil and the gas fields and the steel mills, in short, the sources and means of life — they will corrupt our politics, they will enslave the working class, they will impoverish and debase society, they will do all things that are needful to perpetuate their power as the economic masters and the political rulers of the people. Not until these great agencies are owned and operated by the people can the people hope for any material improvement in their social condition. Nothing is more humiliating than to have to beg for work, and a system in which any man has to beg for work stands condemned. No man can defend it. The world is just beginning to awaken, and all the signs of the times are cheering.

The Socialist Party proposes that society in its collective capacity shall produce, not for profit, but in abundance to satisfy human wants; that every person shall have the inalienable right to work; that every man and every woman can be economically free. They can, without let or hindrance, apply their labour, with the best machinery that can be devised, to all the natural resources, do the work of society and produce for all; and then receive in exchange a certificate of value equivalent to that of their production. Then society will improve its institutions in exact proportion to the progress of invention. Whether you work in the city or on farm, all things productive will be carried forward on a gigantic scale. All industry will be completely organised. Society for the first time will have a scientific foundation. Every person, by being economically free, will have some time for him or herself.

The Socialist Party envisages a society in which there will be no classes and no state. Marxism regards the state as the instrument of class rule. The state, in its essential features, is the instrument of one class for the suppression of another. Capitalism has exhausted its progressive role; now it must leave the stage to a higher system. Capitalism has done its work. 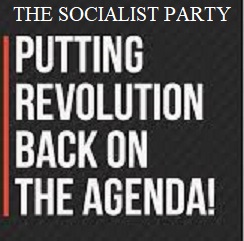 Hi Alan Is there a link to this statement?

Apologies for the inclusion of that phrase. One of the trials and tribulations of copying and pasting...things get included in by error.