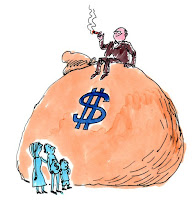 Frances O’Grady, the TUC’s general secretary, said: “People are working harder than ever but wages have stood still for over a decade. Millions of households have been pushed to the financial cliff edge. Working-class families have had enough of a system that’s rigged in favour of the rich and bosses. We want better than rising debts and jobs on impossible hours that make it hard to see our loved ones.”
Household debt soared by a third to record levels in the past decade as workers struggled to cope with the impact of a prolonged squeeze on wages, a new report has said.


TUC analysis found that the average non-mortgage debt of a working family had hit £14,200 through an increased reliance on credit cards, bank loans, payday lending and other unsecured forms of borrowing.


Official figures released by the Office for National Statistics last week showed that median earnings in April this year were still £20 a week below where they were when the UK entered its deepest post-war recession in 2008.


Pressure on family budgets was also reflected in the rising number of personal insolvencies, the TUC said. In the first three quarters of 2019, 93,042 people declared individual insolvency, meaning the total for the full year was likely to to surpass the 115,000 reported in 2018 – itself the highest since 2010.
https://www.theguardian.com/business/2019/nov/05/tuc-household-debt-for-average-family-now-more-than-14000
Posted by ajohnstone at 12:46 am