Our answer to IndyRef2 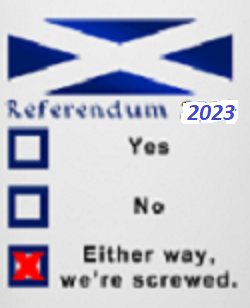 The SNP preach a divisive message among people who the Socialist Party say should unite to establish a frontier-free world community, based on the planet’s resources becoming the common heritage of all humanity, as the only framework within which the social problems which workers wherever they live face today. This is why Socialist Party is implacably opposed to the Scottish nationalists. We are working in opposite directions. Us to unite working people. Them to divide them.

Spare us the pretence that it’s some great extension of democracy. Constitutional reform is of no benefit to us. It leaves our lives and the problems the profit system causes completely unchanged. As far as solving the catalogue of social problems is concerned, constitutional change is just a useless irrelevancy.

The nationalist argument, as propounded by the SNP is quite simple ― and wrong. The people of Scotland, we are told, suffer because they are misgoverned by England; what they need is an independent State of their own so that they could begin to solve their problems. In fact, the problems faced by workers in Scotland are basically the same as those in Britain or Ireland or any other country; they are caused by international capitalism and can only be cured by world Socialism. The setting up of more borders in the world would be a waste of time.

It is tempting to simply vote “no” to the independence question. After all, the Socialist Party doesn’t want constitutional reform (we want socialism) and a “no” vote would be a repudiation of the divisive doctrines of the narrow-minded Scots Nats. But in the end, the point at issue–a mere constitutional reform which will leave profit-making, exploitation, unemployment and all the other social problems quite untouched–is so immaterial that it is not worth choosing sides. We don’t see any point in diverting our energies to changing the constitution but we certainly want things to change. We want people to change the economic and social basis of society and establish socialism in place of capitalism. So we’ve nothing in common with the unionists. They are, of course, not  Scottish nationalists but British nationalists.

So we won’t be voting “yes” or “no”. We shall, however, be voting. We’ll be going to the polling station and, since they are not giving us this option on the voting paper, we’ll be writing the word “WORLD SOCIALISM”  across it as we did in 2014.

The Socialist Party rejects allegiance to any State and its members regard themselves as citizens of the world. We accept the boundaries between nations as they are (and as they may change) and work within them to win control of each nation-state with a view to abolishing them all. a democratic world community without frontiers based on the common ownership of the world’s resources.

If you want socialism, we urge you to register your support for a world socialist cooperative commonwealth, a democratic global community based on the common ownership of the world’s resources. We advocate the rejection both of separatist Scottish nationalism and of unionist British nationalism.