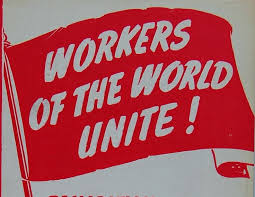 Although our attitude towards nationalism has been stated many times, there are still those who do not understand it or cannot reconcile it with what they are supposed to be the socialist point of view. It is not easy to oppose the emotionalism of powerful patriotic movements but that difficulty is not removed by being acquiescent and avoiding adopting the Marxist analysis

Let us set out the Socialist Party’s answer to the appeals of the patriot that all citizens ought to defend the independence of the country in which they live. Our answer is plain and definite. Under capitalism all the workers in every land are wage slaves. In wars between capitalist nations, victory or defeat,  leaves their position in society unchanged. Even the standard of living of the workers in both the “victorious” and “defeated” countries alters little. The abolition of capitalism and the establishment of socialism is the sole issue for the Socialist Party.

The only enemy of the working class is the capitalist class. Therefore to urge the workers to fight for Britain, China, Russia or Ukraine is to ask them to neglect the problems and the interests of their class. Such propaganda under capitalism, on whatever pretext, is anti-socialist. In comparison with the loss of working class life and limb in war, the difference between exploitation by domestic capitalists and exploitation by foreign capitalists matters nothing at all to workers. We hold an attitude of unqualified hostility to capitalist wars.

We are interested in one struggle only, class struggle the endeavour by wage earners to overthrow capitalist private property and all forms of the wages system. The national movements blazing away in different parts of the world are not working-class, but capitalist, in their aim. We, therefore, oppose them. Patriotism has the effect of binding together the classes in each geographical area. The Socialist Party desires that conflicting class interests shall be recognised, not obscured.

Socialism and patriotism are irreconcilably antagonistic. Patriotism is anti-working class and Russian nationalism is no less so than is British. The one encourages the other. We wish to stifle both so neither can thrive.  The assumption by some on the left-wing that the enemies of the Western powers are necessarily the friends of socialism is too shallow to need refutation.  It has been argued that  that the existence of foreign control enables capitalist politicians to blame the evils of their system on to the “foreigner.” Against this, however, must be placed the great harm wrought by the exaggeration of national feeling, and hatred of foreigners. This breeds a state of mind quite unsuited to working-class organisations: and saps the solidarity of members of the working-class with each other.

Consequently, the Socialist Party is frequently branded as a“puppet” of imperialism because we tell the workers that rule by one section of the capitalist class does not differ in essentials from rule by another section. Instead, we tell the truth, which is that another nation's “independence” should concern no more the workers there than does British “independence” matter to us. Their governments are all operating on behalf of the capitalist class. Just as we told fellow workers in past wars not to support the wars of the ruling class, so we tell the Russian and Ukrainian workers now.  Does any objective observer believe for one moment that Ukrainian capitalists are one whit less brutal in their exploitation of their workers than  the Russia, or for that matter are UK, EU, US, or any other Imperialist capitalist class?  The Ukrainian workers will be no better off when they have had a change of masters imposed.

Capitalism as a world system is not weakened by the victory or defeat of our respective nation-states. The lives of workers are needlessly sacrificed to satisfy the interests of the ruling class. The Socialist Party can proudly boast that it has never urged the workers to fight in or prepare for capitalist wars, and has never, directly or indirectly, aided any political party doing so.

Our advice to both Ukraine's and Russia’s workers is to build up organisations to fight their own capitalist class—they will need them soon enough. Our advice to all workers is to acquaint themselves with their own class interests and get rid of the illusion that they can dictate foreign policy to their masters.