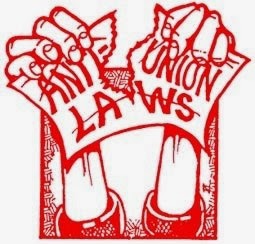 The Tories are planning to make it possible to use agency workers as strike-breakers. This will restrict trade union activity further, thus affecting the entire working class in this country.

Manchester branch calls on the EC to publish a statement on the party’s position, which should include support for democratic union action to resist this plan, along with our argument that such action will only ever be defensive.

The branch realises that the support we can offer will be minor. However, without any statement from the EC, we shall be absent from an important moment in the class struggle. Any statement should of course be distributed via all of our social media outlets

We are approaching a new phase in a long history of anti-union legislation, from both Tory and Labour governments.

The SPGB opposes any attempt to restrict workers’ ability to take collective action to protect or improve conditions  of employment.

We will therefore support union efforts to resist the current government’s declared aim of allowing agency workers to be used as scab labour.

We urge all of our fellow-workers to join an appropriate union, but remind them that this can only ever be a defensive response, that equity is not possible for wage slaves and that the only way to ensure sustained well-being for us all is by replacing the crazed pursuit of profit for the few with a classless society of cooperation, where everything is produced solely to meet human needs.