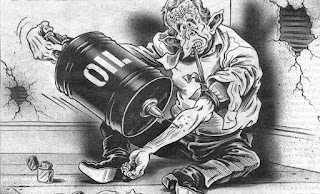 The oil and gas industry has delivered $2.8bn (£2.3bn) a day in pure profit for the last 50 years, a new analysis has revealed.

The vast total captured by petro-states and fossil fuel companies since 1970 is $52tn, providing the power to “buy every politician, every system” and delay action on the climate crisis, says Prof Aviel Verbruggen, the author of the analysis.

“I was really surprised by such high numbers – they are enormous,” said Verbruggen, an energy and environmental economist at the University of Antwerp, Belgium, and a former lead author of an Intergovernmental Panel on Climate Change report. “It’s a huge amount of money,” he said. “You can buy every politician, every system with all this money, and I think this happened. It protects [producers] from political interference that may limit their activities.”

The rents captured by exploiting the natural resources are unearned, Verbruggen said: “It’s real, pure profit. They captured 1% of all the wealth in the world without doing anything for it.”

The profit-grabbing is holding back the world’s action on the climate emergency, he said: “It’s really stripping money from the alternatives. In every country, people have so much difficulty just to pay the gas and electricity bills and oil [petrol] bill, that we don’t have money left over to invest in renewables.”

Prof Paul Ekins, at University College London, says, “But the fact remains that, over the last 50 years, companies have made a huge amount of money by producing fossil fuels, the burning of which is the major cause of climate change. This is already causing untold misery round the world and is a major threat to future human civilisation.

Verbruggen said oil-rich nations, such as Russia and those in the OPEC cartel, including Saudi Arabia, kept rents high by restricting supply: “They change the fundamentals of the markets.” Military action, such as the US-led invasion of Iraq in 2003, and political action, such as the embargo on oil exports from Iran, had also increased the rents, he said. If all available oil and gas could be freely supplied to the market, the price of conventional oil would be $20-30 a barrel, Verbruggen said, compared with about $100 today.

If the world is to limit global heating to 1.5C, the target agreed by nations in the Paris climate agreement in 2015. Mark Campanale, at Carbon Tracker, said, “ ...this means [international oil companies alone] forgoing around $100 trillion of potential revenues. You can see why oil oligarchs and nations controlled by political elites want to keep their fossil fuel rents, the source of their power.”

May Boeve, the head of campaign group 350.org, said: “These profits have enabled the fossil fuel industry to combat all efforts to switch our energy systems..."