The war to end wars - the class war 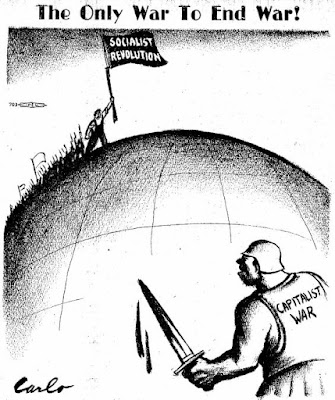 Crises are not caused by the evil machinations of individuals; they have their root cause in the way a society is organised. Surely, it is not now doubted that wars are born of the fight for spoils between capitalists. Throughout the last hundred years, the economic objects of the various wars have stood out so clearly

The only way in which mankind can bring about a social change and build a fraternal society, free of war, is to establish socialism. This will come about as the conscious act of a socialist working-class. Modern war arises from the conflicting economic interests of the various national capitalist groups. The competitive nature of capitalist society sets one corporation against another and which, in the world at large, sets one government against another over the capture of markets for exports, over access to raw materials, the control of trade routes and over the occupation of strategic points. These disputes take the form of intricate manoeuvres in the political, diplomatic and military fields over the control of spheres of influence. he important fact is that these disputes are inseparable from capitalism and that they go on all the time. That is why governments maintain armed forces. That is why the long history of international organisations and conferences for disarmament and peace is a history of failure. This is the basic explanation of the global wars of capitalism which have been going on all the time and of the continual state of tension in which capitalism lives. The inevitable result of all this is that military conflict is part of our lives as long as we live under capitalism.

Under such situations, it is futile to take a moral stand against violence in itself. Many peace campaigners have proved their sincerity and courage, but this does not alter the fact that their views are out of touch with reality. The only way in which war can be removed from our lives is to remove capitalism and replace it with socialism. It requires that a socialist working-class democratically gain control of the machinery of government for the purpose of abolishing capitalism and establishing socialism. Wealth will be produced solely for use and not for the profit of a minority.

This will remove the basic cause of war and will therefore remove the apparatus of war—the armed forces and their weapons. The working-class of the world must first understand and want a new socialist society. They must, in other words, free themselves from ideas which at present keep capitalism in being and consciously choose the new world in which men and women can truly live in harmony and build a world fit for human beings.

The Socialist Party advocates for the removal of a system of society which works out to the detriment of the many. The peace campaigners are out for an alteration of government whereby the wars between capitalist countries can be reduced or abolished. Peace propagandists by no means are united in condemning capitalist society, and they are mostly opposed to a real change in the system altogether. The Socialist Party denounces capitalism and  declares in favour of a new system wherein capital and capitalist governments cease to exist.

To reiterate, the Socialist Part’s attitude to war is that war as we know it is produced in the main by the conflict between the interests of capitalists of various nations. It is born of the rivalry between sellers of goods for profit, and it can only die when selling for profit is abolished. In other words, the socialist theory holds and capitalist practice proves that only by ending the entire capitalist system can war with all its attendant horrors cease.

All sorts of appeals are made to the Socialist Party to join forces with "anti-war” groups, but it is deaf to all such cries. Not because we do not yearn for the cessation of the war. By no means so. The Socialist Party knows full well the horrors that are always following in the wake of war. We know and feel the wreckage of human ties, the break-up of family life, the sorrow and suffering arising from the brutal carnage. But there are two important reasons why we cannot associate with the various "Stop the War" organisations.

Firstly, because we abide by the dictates of the class struggle. Because we stand for socialism and they do not. Because we refuse to associate with those who support the capitalist class during "peace" time and who fight for the subjection of the working class. Therefore we cannot ally ourselves with these pro-capitalists. We refuse to lower the socialist red flag to march with the enemies of socialism. We know that, given the realisation of the whole of the peace programme, the terrors and misery of working-class slavery would be left untouched for the better. The very men who seek our help for "peace" now would be amongst the first to go to "war" against the working class.

The second reason for which we cannot unite with the stop the war movement is that it is impotent for its very object. Even if we held that it was policy to unite to stop the war it would be foolish to join in the programme of these societies. What machinery have they for stopping wars? None. Appeals to capitalists are their general methods. They propose to leave in power the makers of wars, the capitalist class. They intend to continue the profit-making system which itself produces commercial rivalry and inevitably international warfare. If you wish to stop all wars you must stop all commercial rivalry and to do this you must work for socialism.

The Socialist Party is not a specifically pacifist organisation. We are opposed to war on socialist grounds in that wars today are fought over rival capitalist interests concerning sources of raw materials, trade routes, markets and investment outlets and strategic points and areas to protect these. This is why we say that members of the majority class of those obliged to work for a wage for a living have no interests at stake in them and so should refuse to take part in the killing and maiming of their fellow workers from some other country. We also consider that a socialist majority that has won control of political power democratically should reserve the right to use armed force, if necessary, to deal with any armed resistance to the establishment of socialism by some recalcitrant pro-capitalist minority should this occur.