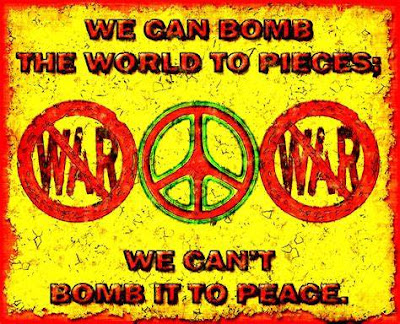 "Patriotism in its simplest, clearest, and most indubitable meaning is nothing but an instrument for the attainment of the government's ambitious and mercenary, aims, and a renunciation of. human dignity. common sense. and conscience by!the governed, and a slavish submission to those who hold-power, That is what is really preached wherever patriotism is championed. Patriotism is slavery." - Leo Tolstoy

We do not deny the sincerity of many peace campaigners and can see that the energy and ingenuity they displayed in tackling a job they considered important provided further proof that once working men and women get on the right track capitalism’s days are numbered.  People in the peace movement would no doubt claim that all politicians are evil, completely insincere persons. But what they have in common is the simple fact that they all support the capitalist system of society. They have different ideas about how it should be run but all are agreed on this essential point.  Unfortunately without the necessary understanding of capitalist society, organisations like the Stop the War Coalition will continue to make mistaken claims, based as they are on irrational ideas about the social and economic forces at work in society today. The vote, when based on sound socialist knowledge and used to send delegates to Parliament as opposed to opportunistic leaders, can be the most useful instrument the workers possess.

Under capitalism, we have a world which is divided into rival and competing nations, which struggle with each other over the control of markets, trade routes and natural resources. It is this struggle which brings nations into armed conflict with each other because militarism is the violent extension of the economic policies of propertied interests. War cannot be isolated from the economic relationships of production or the general object of capitalist production, which is to advance the interests of those privileged class minorities who monopolise the whole process of production. It follows that no working class of any country has any stake or interest in war, and we have always said that workers should never support war. Our stand in the Socialist Party since it was established has been to oppose every war. Armed with this understanding of the cause of war we are committed to working politically with workers of all countries to establish world socialism because that is where the interest of the working class lies. We have never participated in the hideous cause of capitalism at war.

Amid the most extreme pro-war jingoism and hysteria, when nationalistic patriotism is prevalent across the whole population to support the war, the Socialist Party sent out this message. "Having no quarrel with the working class of any country, we extend to our fellow workers of all lands, the expression of our goodwill and socialist fraternity, and pledge ourselves to work for the overthrow of capitalism and the triumph of socialism."  In all wars the Socialist Party sends out this inspiring message of fraternal goodwill.

We are saying that socialism is the only guarantee that war will not take place because it will completely remove the cause of war. But we are saying more than this. All the time capitalism exists, war will remain because the threat of military force, and its use, is a necessary instrument of vested economic interests. All the facts of modern history show that this is why governments maintain vast "defence" expenditures, including the cost of nuclear weapons. It follows then that activity to get rid of war must essentially be the activity to get rid of capitalism.

Think back to past wars democracy and the conduct of war are anathema to each other. The first casualty of war is democracy. It must be obvious to anyone who is not politically naive, that no government undertaking or treaty has ever been kept for longer than it was expedient to do so.

If peace movements continue to support capitalism they must be responsible for all the ways in which capitalism develops. Because capitalism cannot be controlled in the human interest, we do not know all the ways in which it will develop. We invite members of all anti-war groups to join with us now in building a better world. They must build on the concern and indignation and broaden their horizons. They should not place their faith in governments; that is a sure recipe for disaster and disillusion. We must not make pathetic appeals to governments to do something on our behalf. We must take the world into our own hands.