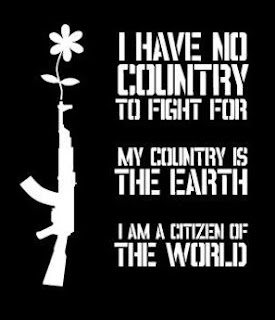 Members of the working class are taught in schools from a very early age that the country they were born in is somehow special. We wave flags and sing patriotic songs. The owning class suffer from no such xenophobia. They are prepared to exploit workers of any nationality, creed or so-called race. To them, profit is much more important than patriotism. The Socialist Party is often pilloried because we look at the world from a class perspective. History shows that in times of war, working-class interests are never served by workers offering their support to nationalist political leaders of capitalism. The slaughter in Ukraine underlines yet again the urgent need to work for a world without nations and nationalism, without bosses and generals.

There is nothing natural about war. Modern war is inherently antithetical to the interests of the working class, involving, as it does, disruption to the complex and integrated system of production we depend on for our existence, and necessitating the imposition of the tyrannous political structures needed to govern a society in a period of total war. What is the “independence” the Ukrainians yearn after, if it means being trapped within borders – artificial constructs, no, prisons – inside of the bigger prison of capitalism?

It’s understandable that the conflict in Ukraine should command such worldwide attention as genuine suffering is being incurred by innocent people. The World Socialist Movement is sickened  by the death and destruction caused by the Russian invasion. We condemn and denounce the senseless killing of our fellow workers. But, let’s not lose sight of the fact that the war in Ukraine is just one of a number of wars taking place around the world. The war in Ukraine isn’t an exception or an aberration but another unavoidable part of the economics of capitalism. The war war is a normal consequence of the international political tensions inherent within capitalism run by a ruling class comprising of dictators, oligarchs and gangsters. Each of whom funds governments to best protect its interests. The world owned by a small global minority and is divided up between them.  Working people are left to toil in their factories and die in their armies.

Workers have no country. Without the ideology of nationalism, capitalist states would be unstable since, being based on minority class rule, they need a minimum allegiance from those they rule over. Nationalism serves to achieve this by teaching the ruled to be loyal to “their” so-called “nation-state”. Nationalism is based on the lie that workers have their own country; that the British have an obligation to Britain and likewise with the workers of Russia and Ukraine. Workers who do not own nor control have no obligation to the bosses who do own and control it. Our sole interest is in co-operating with our fellow workers across the world who similarly have no country. Why should we die defending what is not ours and which we will never benefit from? On the contrary, our objective is to obtain what is not now the possession of our class – the earth and its natural and industrial resources. The only war that need concern us is the class war between the parasites who possess and the workers who produce the wealth of the planet. Our war is waged on the battlefield of ideas for the hearts and minds of the world’s people. Socialism will allow humanity to co-exist in peace. We are not born with a desire to kill people who speak a different language. Peaceful cooperation is possible for human beings.

The Socialist Party has been consistent in its opposition to nationalism, in the belief that nationalism is a killer epidemic, creating conflict from which those with the least to gain have the most to lose. Whatever cause and victory the misinformed defenders of nationhood believe they are fighting for, it pales into insignificance when compared to the real war that needs to be waged against an elite who perpetuate the myth of nationhood for their own ends and always to our detriment.  there is more that unites Ukrainians and Russian than can ever divide them. Their real needs—needs people the world over identify with—can only ever be fulfilled in a world devoid of borders or frontiers. We can only hope it is not too long before they come to realise this.

Class consciousness was never more needed than now. Today mankind is under a dark shadow without precedent. The working people of the world have it in their hands to end poverty, fear, hatred and war. Nationalism is not their interest but their rulers. To free ourselves from the depredations of capitalism we need the World Commonwealth