Hunger - history is repeating itself. 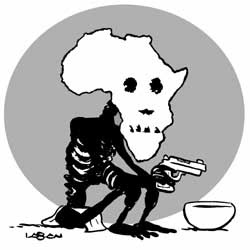 There is nothing natural about famines in the twenty-first century. While a complex set of factors drove food insecurity, the slide into mass death is man-made, driven by international inaction. This crisis was predictable and preventable. It has been unfolding despite two years of repeated warnings. The lack of action reflects a wider failure of the international system. The global response is failing and major donors waiting for others to step up will cost thousands of lives.

It is already too late to stop people from dying, but there is still a window of opportunity to scale aid efforts to reduce the levels of death and suffering. Yet the international system is sitting in neutral at precisely the moment it needs to be accelerating.

The International Rescue Committee (IRC) is calling for urgent action in Somalia, Ethiopia, and Kenya, with specific concern for intensifying famine in Somalia that has been dangerously neglected by the international community.  Today, Ethiopia, Kenya, and Somalia make up 2% of the world’s population but are home to 70% of the world’s most extremely food insecure.

By the time a famine is officially declared later this year, it will be too late to save hundreds of thousands of lives. IRC teams on the ground report that people are dying already from starvation. Yet the crisis has struggled to attract the attention and funding it desperately requires.

The number of people going hungry in the region is set to surpass 20 million by September - nearly a doubling compared to late 2021.

Over three million of these people are already experiencing the most extreme levels of hunger, increasing their risk of death.

The worst affected is Somalia, which is entering a famine that the IRC expects to be even more severe than the 2011 famine that killed 260,000 people. It is a country hurtling towards a catastrophic famine. Adjusting for total population, that would be on par with 6.5 million deaths in the United States, including more than 3 million children under 5 years old - the equivalent of more than six COVID-19 pandemics.  Presently in Somalia, food aid is only 20% funded, nutrition 18% and health 10%.

This year, Somalia, Ethiopia and Kenya are in the middle of their longest, most severe drought in decades and have been disproportionately affected by the Ukraine conflict, given they were reliant on Russia and Ukraine for 90% of their wheat imports. Increased global food prices would not have had such a significant impact if drought had not already devastated agriculture. And the worst is yet to come. Reduced access to fertilizers coincided with the region’s main planting season, so the effects will not be fully seen until future harvests later this year and next year.

What we are seeing is a failure of political will to apply lessons and act before it is too late. Promises and pledges are not translating into change for people in the world’s crisis zones. Funding for East Africa is falling far short of previous responses to past famine warnings around the world. Across East Africa today, an emergency appeal for the drought has received only 38% of the funds required for May to December 2022

The generous funding for Ukrainians stands in sharp contrast to severe underfunding in East Africa. While Ukraine represents 5% of the world’s humanitarian needs, it has received 20% of global aid this year and more than four times as much humanitarian funding as Somalia. Donors have provided $56 per Somali in need of aid compared to $121 per Ukrainian in need of aid.

A famine declaration will tell us when it is too late - that people are already dying en masse, not how many lives we can still save. Waiting to respond based on retrospective data to formally declare famine conditions will condemn hundreds of thousands to unnecessary death. Every day of inaction is a matter of life or death.

Posted by ajohnstone at 6:56 pm