Shaking hands with a murderer 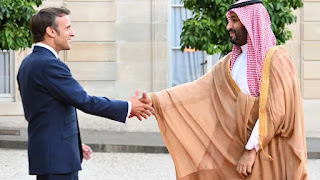 Following Biden's friendly overtures to  Saudi Arabia's Crown Prince Mohammed bin Salman (MBS), France's President Macron warmly greets the man responsible for the assassination of a journalist as well as the instigator of bombings in Yemen.

The fiancee of the late Khashoggi expressed outrage at the visit. "I am scandalised and outraged that Emmanuel Macron is receiving with all the honours the executioner of my fiancee, Jamal Khashoggi," Hatice Cengiz said.

"I feel profoundly troubled by the visit, because of what it means for our world and what it means for Jamal (Khashoggi) and people like him," Amnesty International Secretary General Agnes Callamard explained, describing MBS as a man who "does not tolerate any dissent...The visit by MBS to France and Joe Biden to Saudi Arabia do not change the fact that MBS is anything other than a killer," said Callamard, who at the time of the killing was the UN special rapporteur on extrajudicial killings and led the independent probe.

Saudi Arabia is seen by many in the West as an essential partner due to its energy resources, purchases of weaponry and staunch opposition to Iran's theocratic regime. Russia's invasion of Ukraine has made the oil and gas reserves of the kingdom all the more important for the West.

Callamard expressed concern that "values were being obliterated in the face of concern about the rising price of oil".

Camille Lons, a research associate at the International Institute for Strategic Studies (IISS), said that the war in Ukraine has put "energy-producing countries back in the spotlight, and they are taking advantage of it. This gives them political leverage that they will use to reassert their importance on the international stage"