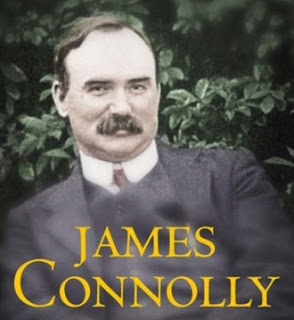 James Connolly is better known for his nationalist martyrdom, being executed for participating in Dublin's Easter Rising. However, he was previously the founder of the Socialist Labour Party in Scotland, emigrating to the United States to become a full-time organiser for the American SLP. He also became an activist in the Industrial Workers of the World. The following essay is a reminder of his socialist origins.

In every discussion on the aims and objects of a Socialist Party some one is sure to bring up the objection that even if the Socialist Party were to conquer their opponents, and make an effort to establish their ideal as a political and social edifice, the difficulties which would arise out of the inability of the common people to understand the complexity of the social system they were called upon to administer, would infallibly produce the downfall of the new order. This objection is, it seems to us, rather far fetched in view of the circumstance that the majority of those who at the present day are entrusted with the work of organizing and administering the capitalist system are completely ignorant of every development of the system outside of their own particular sphere of employment.

It is not at all necessary that everyone, or even a very large number, of those engaged in labour should be able to give an intelligent account of the multifarious processes of production, nor yet that they should be qualified even to trace the passage of the commodities upon which they are employed through all their stages from the crudity of the raw material up to the perfection of the finished product as it eventually reaches the hands of the purchaser. It is only necessary that each worker should perform with due skill and scrupulosity his own allotted task; to the few required as organisers of industry may be left the work of adjusting and interlocking the parts. Even this latter function – formidable as it may look when thus baldly stated – may be reduced to a mere automatic function to be executed as a part of the routine work of a clerical staff.

Any person reflecting upon the mechanism of the capitalist system can readily perceive how little its most important arteries of commerce are dependent upon international organisation, and how much upon the reciprocal action of the economic interests involved at first hand. Where the international organization of Socialism will indeed come into play it will come to smooth over and simplify many of the difficulties which are constantly arising under capitalism as a result of the clashing of personal interests. Hence the Socialist organisation of industry will preserve the effectiveness due to the development of capitalism whilst entirely obviating the friction and disputes capitalist competition entails.

It is well also to remember the multitude of things which in civilised society we are all compelled to take upon trust at the word of others. It is safe to say that what is called ‘progress’, or civilisation, would be impossible were each individual in the community, or even a majority, to insist upon acquiring a complete theoretical and technical mastery of, say, each new application of Science to the needs of life before consenting to allow its use. There are few persons nowadays who would shrink from trusting themselves to railway trains, even although in all but complete ignorance of the mechanism of the steam engine, signal-boxes, points, and brakes; we have had gas in our houses, shops, and public buildings for several generations, but to this day the number of those who really understand the processes of gas production, storage, and distribution are extraordinarily few, yet that does not prevent us using it despite its well known poisonous and explosive nature. And so we might go on enumerating many things in daily use – the use of which involves risk to life – which are accepted and freely utilised by people at large without stopping to acquire a perfect knowledge of their active principle.

Much the same might be said of the pretended wonderful and mysterious results to be attained under Socialism – results too wonderful to be realised. In Socialism there is nothing so abnormal that its realisation could exceed in strangeness things we see around us every day, and composedly accept with the greatest equanimity. In the proposition that the community can so arrange the work of production and distribution that plenty can be provided for every human being, there is nothing, in view of present day machinery, half so extraordinary as the fact that if a gentleman sitting down to dinner in Dublin sends a telegram to a friend in Australia that friend will have received said telegram before his Dublin correspondent could have finished the final course of his repast. The fact that people in Ireland were reading accounts of battles in South Africa, 7,000 miles off, while those battles were still in progress, is far more intrinsically wonderful than a system of society in which labour enjoys the product of its toil, and neither hereditary tyrants nor capitalist exploiters are tolerated.

If these stranger developments have been accepted whilst Socialism is still rejected, it is because the personal economic interests of the classes controlling the educative and governing forces of the world are in line with such developments, while the same personal economic interests of those classes are as directly opposed to Socialism. But the workers are in the majority, and their interests are in line with Socialism, which may, therefore, be realised as soon as they desire, and are resolute enough to put their desires into practice.

We propose to treat of a few of the Difficulties of Capitalism. In this connection we would point out that the critics of Socialism invariably devote their energies to demonstrating how far a Socialist system would fall short of ideal perfection, and, having so demonstrated to their own satisfaction, they affect to conclude that the last word has been said, and argument is at an end. It may perhaps surprise such critics to learn that such a line of argument leaves untouched the real contention of the Socialist Party which nowhere proposes that Socialism will escape the taint of fallibility due to all institutions of human origin, but only that the establishment of our social arrangements on a Socialist basis will ensure material prosperity to all men and women, and by so ensuring leave the race full freedom to seek for such expression of its faculties as is best suited to their varying characters. It does not assume that with the advent of Socialism all the evil of our nature will immediately disappear, that love, hate, ambition, lust, envy and all the forces which in our complex natures make for the stirring up of strife and discord, will be instantly eradicated, and the earth take on the aspect of Paradise. But it does contend that Poverty and the crimes born of poverty may be banished, and that with the elimination of the economic struggle from our life the intellectual forces which to-day expend themselves in striving for mastery will find expression in avenues of greater helpfulness, and individuals seek renown as benefactors instead of exploiters of their species.

Our sapient critics likewise forget that the line of argument which consists solely in discovering possible flaws in a future state of society is permissible only to those who defend a state of society in itself flawless. Such capitalist society obviously is not. Its glaring contradictions are so many and so apparent that many of its most zealous defenders rely for their success in maintaining its integrity intact upon their skill in impressing the ignorant multitude with the belief that reform is hopeless, and, therefore, politics a mere waste of time. The space at our disposal would not permit of the mention of a tithe of the problems and difficulties, the contradictions and absurdities, which abound in the very nature of capitalism, but a brief enumeration of a few of these may be of use in serving to convince the less obtuse of our critics that they are playing with a two edged sword when they speak of the difficulties Socialism may have before it.

Why is it necessary that human beings should work at all? In order that the world may be supplied with goods, of course. Do we therefore rejoice when the world is so supplied? Oh, no, that is the greatest disaster we can imagine, for then we would be thrown idle, owing to over-production. We must labour in order to supply the world, and when the world is supplied we must starve because there is plenty for all and our labour is not needed.

One difficulty – one insoluble difficulty – of capitalism is to devise a method whereby the march of science and inventive genius can assist industry without menacing the bread and butter of the working class.

Property of all kinds making for human comfort commands the respect of all men. Yet there are times when the unemployed building trades need not repine if a conflagration lays a street in ruins, or an earthquake wrecks some noble building; and we have known shipwrights to rejoice when some stately ship foundered in mid-ocean.

The world rejoices at the progress of medical science, yet the same healing art which withholds its victims from the grave robs the cemetery companies of their expected dividends, and the funeral undertakers of chances of earning a livelihood. Under capitalism matters of public calamity – war, pestilence, death – are often matters of private thanksgiving; the crepe on the widow’s bonnet finds its counterpoise in the breakfast on the grave-digger’s table.

When capitalism has made the private interest coincide with the common weal; when machinery becomes in reality ‘labour-saving’, and not as at present, wage-saving; when an overstocked market means for the worker a well stocked larder, and not idleness and hunger, then it will be time for our enemies to tell us of our future difficulties.

But under Capitalism that time will never come.

I'm sure you've already read this but a good article from the October 1973 issue of the Socialist Standard:

A man who rose up from his knees but only to then stagger back down on them, to paraphrase a well-known saying attributed to him.