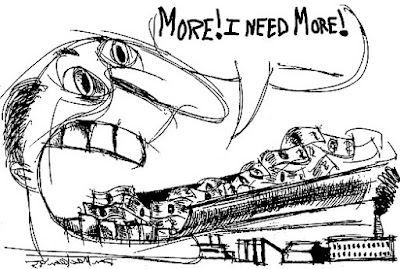 Millionaire CEOs in American companies saw an average pay raise of 29% in 2020 while their workers saw a 2% decrease.

The Institute for Policy Studies calculated that the average CEO compensation in 2020 was $15.3m when looking at the 100 companies  with the lowest-paid median wage for workers.

Hilton’s CEO, Christopher Nassetta, had a compensation package worth $55.9m in 2020, the highest of the CEOs analyzed in the report, while median pay at the company was $28,608, down from $43,695 in 2019. Since the pandemic affected the company’s expected performance, and thus Nassetta’s expected compensation, the company’s board restructured its stock awards to give its CEO ample pay in 2020.

Chipotle’s board removed the company’s poor financial results from the peak of the shutdown and excluded Covid-related costs when calculating CEO Brian Niccol’s compensation. Niccol received $38m last year, which is 2,898 times more than the company’s median worker pay of $13,127.

David Gibbs, the CEO of Yum Brands, parent company to KFC, Pizza Hut and Taco Bell, ended up with a $1.4m cash bonus and stock grant valued at more than $880,000 after the company changed his performance metrics. The bonus was over twice the $900,000 of his salary Gibbs announced he would forgo to fund one-time $1,000 bonuses to the general managers of his company’s restaurants last March. Gibbs’ 2020 compensation was $14.6m while the company’s median pay was $11,377, according to the report.

Posted by ajohnstone at 5:45 am