Failing to Prepare for the Inevitable 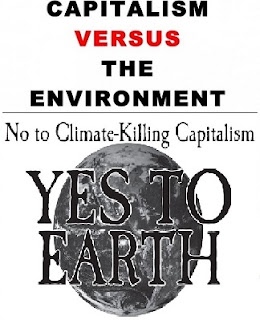 A survey of 800 cities around the world, carried out by the Carbon Disclosure Project, found that last year about 43% of them, representing a combined population of 400 million people, did not have a plan to adapt to the climate crisis.

One in four, a quarter, of the cities explained budgetary restraints, a lack the money, was the reason they were unable to prepare to protect themselves against the ravages of climate breakdown.

The planet cannot withstand the onslaught of capitalist culture for very many more years. We are already close to some irreversible tipping points (if we haven’t already reached them). Only a few more years of production for profit, using cheap energy such as coal, will usher in catastrophic global changes. We will have annihilated beyond comprehension vast areas of arable land needed for growing vegetables, despoiled and polluted the supply of fresh water. We are on a march towards planetary suicide. libertarian communism/socialism is where everybody has an equal say in making decisions that affect them and where everybody is assured of equal access to the benefits of society. It's summed up in the old phrase "from each according to ability, to each according to needs." There isn't any reason to keep the wage system after a revolution. As every product is a social product - nobody produces anything in isolation any more - the products themselves ought to be socialised. It's simply not possible to ascertain the true social value of anyone's labour, and in truth not worth the effort of finding out. Everybody's contribution matters. It wouldn't matter how many surgeons we had, if we didn't have cleaners ensuring a hygienic workplace. Both contribute to society. Why discriminate in favour of one in the future society? It'll only preserve the class nature of society. We should move immediately to a system of "to each according to need". We envisage that autonomous cities and industries will federate together and co-ordinate their activities. With socialism there won't be any competitive reason not to. With voluntary co-operation there won't be any need for a centralised authority.

The climate crises are  not just caused by “technology”, and a return to the “simple life” is no answer (though less worship of "progress” might help). Our environment is the world in which we live, and technology offers us means for it to be a good world. But no technique of production is indispensable. There is a substitute for anything, or there soon can be if research resources are channelled in the appropriate direction. Something can be done about global warming, and of course something is to some extent being done, and the reasons for its slowness and indecisiveness are economic, not technical. We will concede it would be incorrect  to suppose that capitalism is doing nothing about the ecological  problem. It is true that the picture has now become more confused with corporations which formerly flaunted their disdain for nature  now  treat the environment as an opportunity for positive  public relations claims. Short-sighted lobbyists often talk as though the choice for capitalism was concern for the environment or economic growth, but the truth is that in the long run a lack of concern for the environment will cut growth. Though government climate-control laws raise the costs of production, corporation do not necessarily mind their costs rising—so long as their competitors are in the exact same boat. Anything which raises costs all round help to eliminate  small businesses to the benefit of the large concerns.

But to suggest that most big capitalists might welcome carbon-emission restrictions, does not prevent their still having an incentive to bend or break these laws.